A sense of urgency

Five arguments against the inevitability’ of superhuman AI provided by Kevin Kelly centre around the observation that intelligence is not a ladder and that life is ‘equally evolved’ in many different directions.

That may be so but humans evolution has allowed our species to totally dominate the planet and it seems at least worthy of consideration that AI systems of our making may end up superseding us as masters of unnatural destiny.  Stephen Hawking certainly believes so.  In a new series he’s doing for the BBC he’s very blunt about the risks and suggests that humanity has 100 years to get off the planet to save ourselves from resource depletion and AI:

“Once humans develop artificial intelligence, it will take off on its own and redesign itself at an ever-increasing rate,” Hawking warned in recent months. “Humans, who are limited by slow biological evolution, couldn’t compete and would be superseded.”

The sense of urgency is palpable in tech companies.  Evidence that Amazon are building their future around AI is provided in this excellent LinkedIn post which also cites Next-Generation Logistics and Enterprise Cloud as key growth areas.  It comes in the form of an analysis of currently open positions within the company: 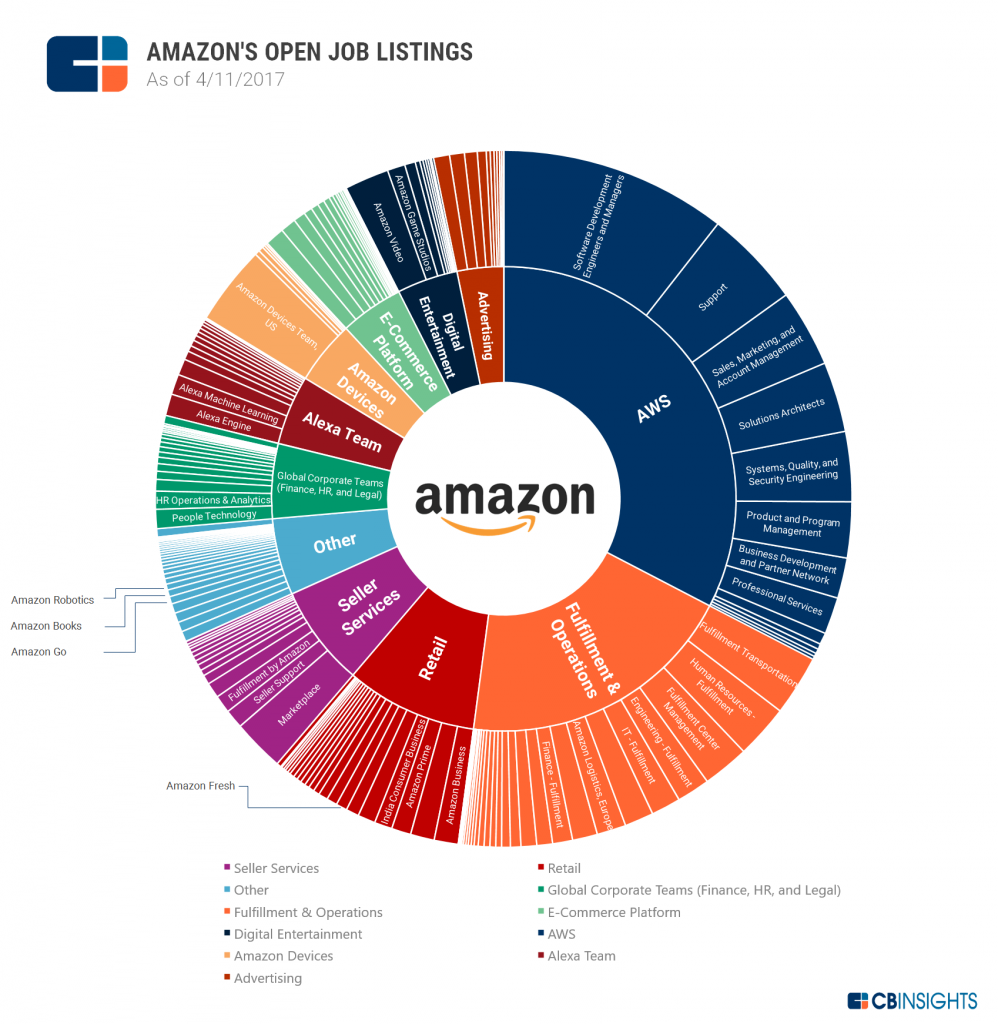 Amazon’s scale is much vaster than many outsiders comprehend. Geekwire provides this analysis of employee numbers revealing the company now has some 350k employees last year, an increase of 43% YoY: 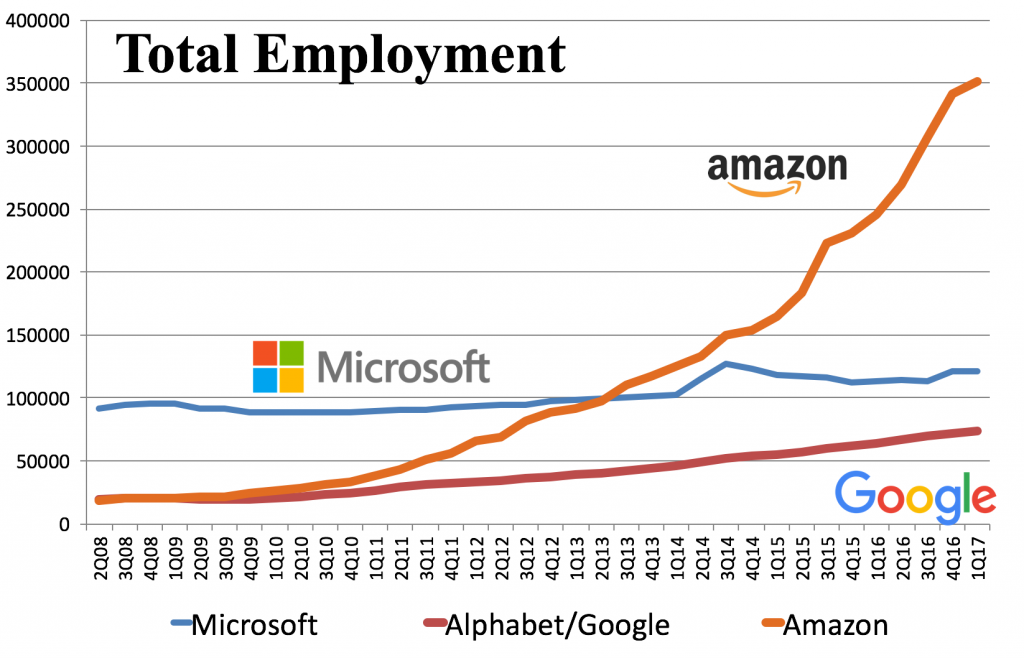 Warren Buffett has suggested that Amazon CEO Jeff Bezos is “the most remarkable business person of our age” and his company remains on track to become the Everything Store for the world.  Just one sign of that are the continuing efforts to expand Amazon Video reach right across the living room including, according to this report, Apple TV all because as Bezos memorably put it:

“We’ve been able to monitor the people who use Prime Video … they renew [Prime memberships] at higher rates and they convert from free trial at higher rates.  When we win a Golden Globe it helps us sell more shoes.”

Even so, luxury remains seemingly well out of reach:

DeX is a $149 smart docking station for the Galaxy S8 released by Samsung.  The Verge tried it out and were stunned at how good it was – far superior they felt to Windows 10 Continuum:

Plug a Galaxy S8 into the DeX dock for the first time and, in about a minute, a desktop environment, complete with app tray, shortcut bar, and system tray, will pop up on the connected monitor. All of the apps that you had been using on the phone before you docked it are available as icons at the bottom of the screen, which means there will likely be dozens of icons in the task bar right away. The system tray at the lower right provides access to notifications, settings shortcuts, and the time and date, just like you might find on a Windows 10 computer. 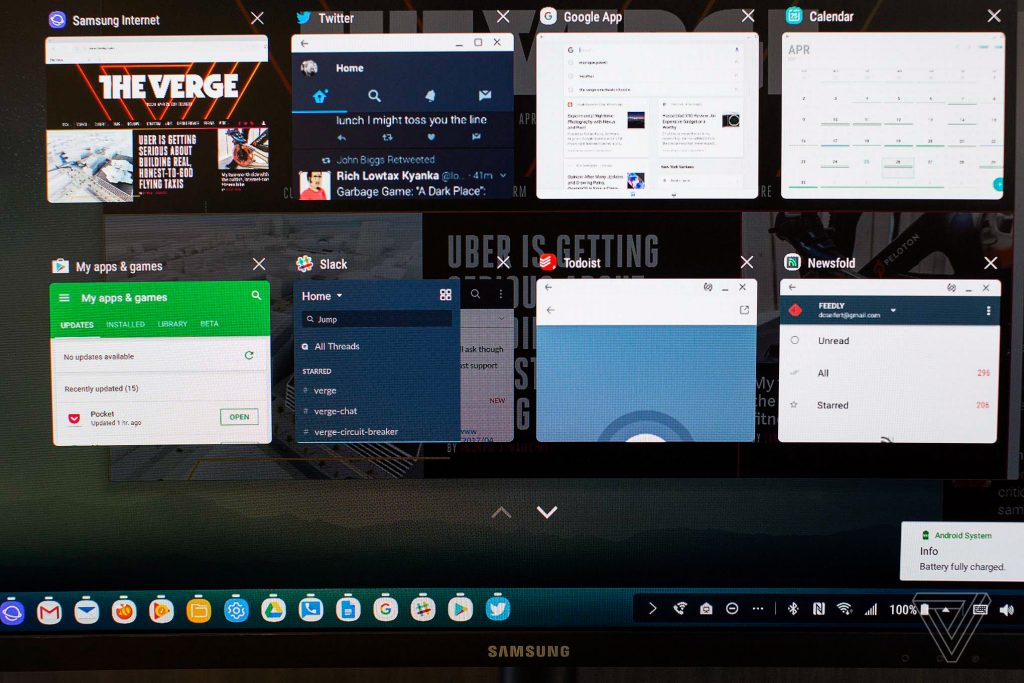 Andrew Orlowski at The Register is similarly bowled over by the new Blackberry KeyOne:

After 24 hours with the KEYone as a main phone, I’ll stick my neck out and say this is one of the best phones of the year, one deserving of any professional’s attention, not just a nostalgia trip. It’s a genuine five-star product, and eighteen months into BlackBerry’s Android adventure, it’s finally got it right: rarely have I had a first day with a device with so few niggles. Google should deliver a huge crate of beer to TCL and BlackBerry for making Android interesting again, in a sea of generic rectangles. 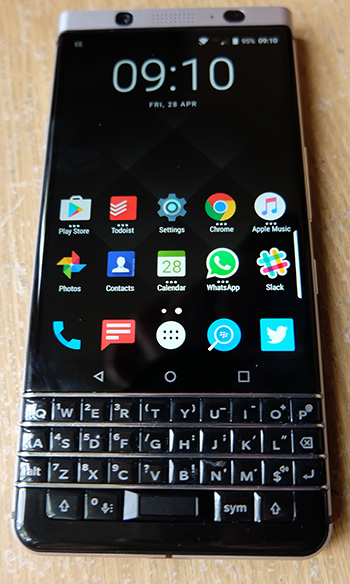 Exciting new smartphones or not, the minimum safe age for kids to get one is 14 according to Bill Gates.

How the Mind Works

How walking in the Lake District helped one man combat dementia:

I come twice a day sometimes. I know every part of the path, and lots of individual stones. I’ve done it more than 5,000 times, and hope to do it long into my illness. But I don’t call myself a walker – not at all – this is me. Me and the Lakes. I found a place where I fit in – I’ve become part of the landscape and it’s become part of me. It’s a kind of symbiosis 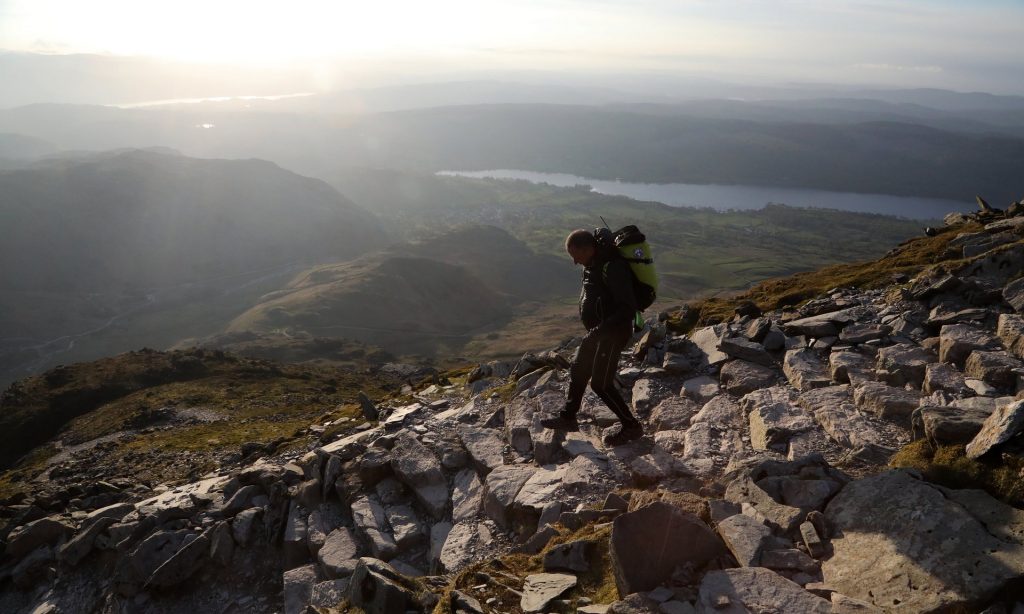 In echoes of the film Arrival, evidence from Sweden that bilingual speakers may experience time differently from the monolingual.

Why standing desks may not be that great for concentration.  It’s all to do with expanded scope for ‘inter-personal affect transmission’ to occur:

When standing in an office—especially one where others are sitting—your range of vision is far wider; you can see a lot more faces from a higher vantage point than you do sitting down. The more people you can see both directly and peripherally, the more faces you are unconsciously trying to interpret. And the more you process this information, the more likely you are to take those emotions on yourself.

Why wasting time is psychologically important and we don’t do enough of it.  Even if we do, it’s often at the expense of feeling guilty:

The truth is, work expands to fill the time it’s given and, for most of us, we could spend considerably fewer hours at the office and still get the same amount done.

This course on how Git works promises to ensure you will get your head around it in less than two hours.

The Python GIL and thread-safety are well covered in this post.  The basic outline is as follows:

One thread runs Python, while N others sleep or await I/O.” Python threads can also wait for a threading.Lock or other synchronization object from the threading module; we shall consider threads in that state to be “sleeping”, too.  When do threads switch? Whenever a thread begins sleeping or awaiting network I/O, there is a chance for another thread to take the GIL and execute some Python code. This is “cooperative multitasking.” CPython also has “preemptive multitasking”: If a thread runs uninterrupted for 1000 bytecode instructions in Python 2, or runs 15 milliseconds in Python 3, then it gives up the GIL and another thread may run. Think of this like “time slicing” in the olden days when we had many threads but one CPU.

Good introduction to Deep Learning with Keras, a high-level library for neural networks which can take TensorFlow as its backend.  The post has plenty of handy links to useful resources:

Creating a new neural network has a lot in common with cooking – there are typical ingredients (layers) and recipes (popular network architectures). The most important cooking contest is ImageNet Large Scale Visual Recognition Challenge, with recognition of hundreds of classes from half a million dataset of photos. Look at these Neural Network Architectures, typically using 224x224x3 input (chart by Eugenio Culurciello): 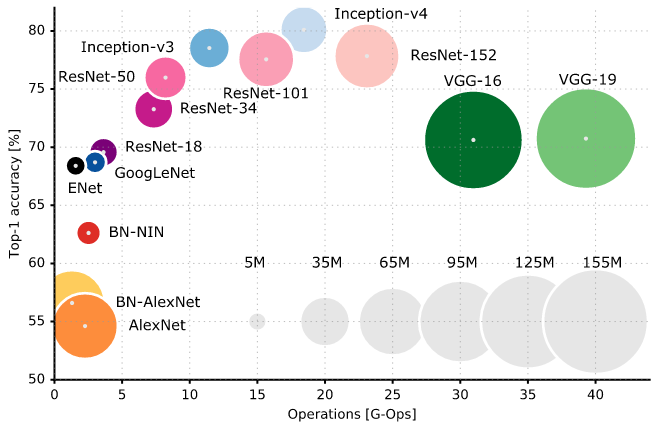 Essential Guardian piece on the Great British Brexit Robbery or how a “shadowy global operation involving big data, billionaire friends of Trump and the disparate forces of the Leave campaign influenced the result of the EU referendum.”   There’s some powerful and disturbing analysis in here particularly around the dark web that connects Trump’s cohorts with Vote Leave:

A government that has just triggered an election specifically to shore up its power base. An election designed to set us into permanent alignment with Trump’s America. … This is Britain in 2017. A Britain that increasingly looks like a “managed” democracy. Paid for by a US billionaire. Using military-style technology. Delivered by Facebook. And enabled by us. If we let this referendum result stand, we are giving it our implicit consent. This isn’t about Remain or Leave. It goes far beyond party politics. It’s about the first step into a brave, new, increasingly undemocratic world. 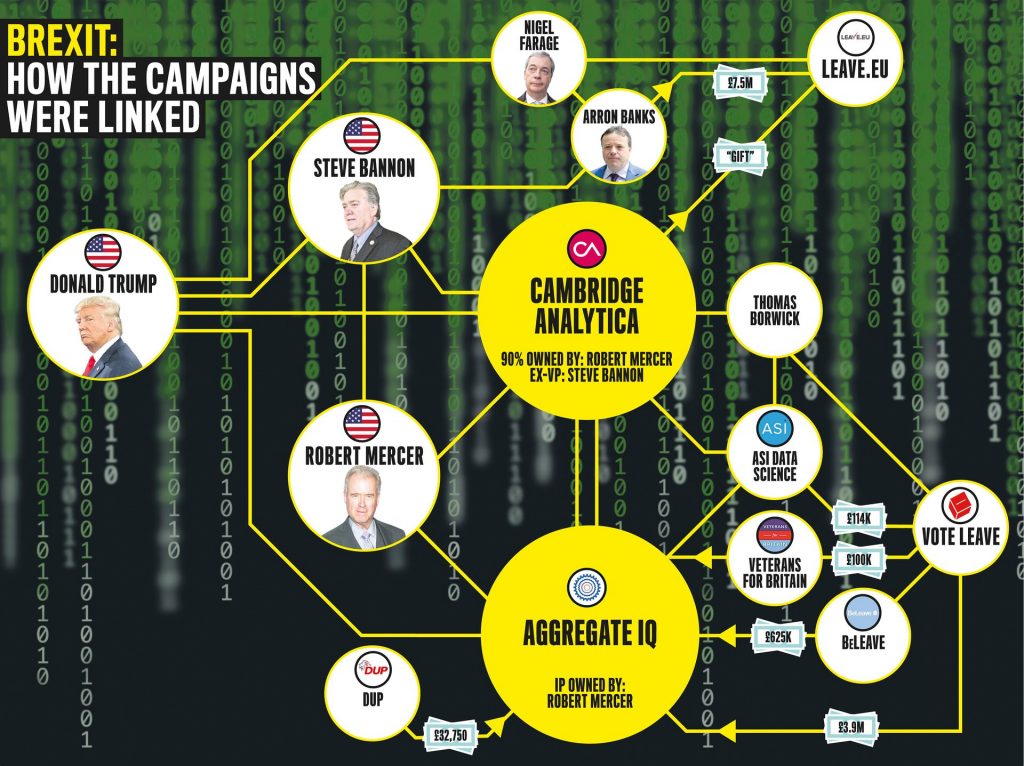