In effect, these systems are vast mechanical Turks. They don’t know what anything is of itself – rather, they try to create, capture and channel human annotation around those things. They’re vast distributed computing systems in which the CPUs are people and the platform is the router and the interconnections.

Evans’ key point is that they are systems of leverage where arguably it is humans that are being exploited and played:

But we move the point of leverage, and change, perhaps radically, how many people we need, and so we change some of the ‘winner takes all’ effects.

The impression is striking, a dystopian vision of a future where you are either above the API  controlling its operation or increasingly a cog in the vast precariat machine underneath.  Except that it isn’t science fiction.  This really is happening.  The capitalist system that has adapted to everything thrown at it over the last 250 years is scrambling to preserve legitimacy.  Exhortations to national pride and anything else that comes to hand are all being used to blow life into that old trope that “if you don’t work harder the communists will win“.  It really does feel now that asking people to work like machines and embrace 996 culture because that’s what it will take to compete with China isn’t going to work any more especially for the youth – that future is all used up:

You’re not going to “beat” the Chinese by one-upping 996 with 997. You’re not going to top Jack Ma’s calls for sacrifice by injecting nationalist fervor and clash-of-civilizations rhetoric into these base pleas for a deeper grind. This is madness.

If you define winning solely as “who has the greater growth”, you’ve already lost. If you dismiss the standard of living enjoyed in Europe – one without medical bankruptcies, crushing college debts, or falling life expectancies – as a “retirement society”, you’re the one who deserves to be dismissed.

The ideological underpinnings of capitalism are already in an advanced state of ethical decay. You don’t save the good parts of said capitalism by doubling down on the worst, most exploitive parts. Racing to the bottom just gets you there faster.

The current system feels ripe for massive disruption and is unlikely to survive the existential stresses it faces in the coming decade due to the climate change and environmental degradation because it can’t offer real answers fast enough.  We must collectively face and find a way to overcome the biggest threat humanity has ever faced within a decade or two or face catastrophe.  Machines and platforms can help but only if we work together with them to save ourselves.  Our house is literally on fire:

We are at a time in history where everyone with any insight of the climate crisis that threatens our civilization—and the entire biosphere—must speak out in clear language, no matter how uncomfortable and unprofitable that may be.

As if the existential threat posed by the climate crisis wasn’t enough already, Nick Bostrom predicts the rise of super villains among other insights in his deeply scary Vulnerable World Hypothesis.  The extent of systemic change and global governance needed to prevent catastrophe seems impossibly far away from today’s geopolitical context:

all we need to do is stop Google, get everyone in agreement on our collective morals, create an ubiquitous surveillance state, and establish a one-world government.

Right now many key nations are pursuing narrow self-interest looking to run ahead of the rest to gain some perceived advantage.  Front of the pack is China which is gaining the dubious distinction of being “a pioneer in applying next-generation technology to watch its people, potentially ushering in a new era of automated racism“:

documents and interviews show that the authorities are also using a vast, secret system of advanced facial recognition technology to track and control the Uighurs, a largely Muslim minority. It is the first known example of a government intentionally using artificial intelligence for racial profiling, experts said.

Great, accesssible explanation of how to accurately model activity recognition using a combination of RNN and LSTM with Tensorflow.  This approach requires no labelled data – it’s entirely unsupervised learning.  There’s no escape from the Panopticon.  If you cover your face, gait analysis will find you out:

Using R to analyse the redacted Mueller Report as a single dataframe:

The Mueller Report, frequency of key phrases and names, by volume with highlights. #rstats #tidytext pic.twitter.com/6weiAcgU75

To create Discover Weekly, there are three main types of recommendation models that Spotify employs:

Google Director of Research Peter Norvig presents As We May Program at Microsoft Research which outlines how ML and AI will change the nature of programming.  It’s a must see tour de force:

PyIodide feels like a genuine attempt by Python advocates to counter the momentum of JavaScript.  It “gives you a full, standard Python interpreter that runs entirely in the browser, with full access to the browser’s Web APIs.”  How it does that is interesting:

Pyodide is put together by:

Remembering Joe Armstrong, the genial creator of Erlang who passed away in April.

The best programming tools for kids in this listing include Minecraft and Scratch naturally but other than that are mostly ones I’ve not heard of.

Signal v Noise on why they left Medium.  The initial attractions have faded for many others too or never existed in the first place which is why this newsletter has stayed off Medium even though it has cost time, effort and money to do so:

Traditional blogs might have swung out of favor, as we all discovered the benefits of social media and aggregating platforms, but we think they’re about to swing back in style, as we all discover the real costs and problems brought by such centralization.

The job of the future is Editor in Chief because “there’s a growing need for the type of people who can steer teams to tell stories and deliver information in a way that gets potential customers to take heed.“

An exclusive from The Information goes into Airbnb’s engineering challenges and their “Amazon envy”.  Sounds like they have a massive transformation project to deal with first:

Airbnb is shifting its code to what is known as a services architecture. Like many startups, Airbnb originally grew its business off a single, interconnected code base written in the coding language Ruby on Rails. That meant that as the company grew, software engineers would have to make updates to the site one at a time, slowing down how quickly the work could progress. The new technical infrastructure will allow engineers to do things like make changes to the code powering messaging between hosts and guests without affecting engineers working on the listing results page.

Wired on how AR is going to spark the next big tech platform which they call “mirrorworld”, where every object will be a strange twin of our real one:

Someday soon, every place and thing in the real world—every street, lamppost, building, and room—will have its full-size digital twin in the mirrorworld.

A fascinating internal Google survey on what makes for productive teams focuses heavily on virtual meeting culture with these three top recommendations:

2. For recurring meetings, switch up the time.

The article links to Google’s distributed working playbook which is also worth reading.

What people don’t tell you about Product Management.  Namely that the biggest challenges you’ll face are internal politics and lack of resources:

Use this framework to start. Diverge as you learn.

This basic framework is a good way to format your proposal. Use it as a base, then iterate as you gain more experience.#Public_Speaking /7 pic.twitter.com/mtVfhV409s

Greta is the One who speaks ethical truth to power.  I suspect her influence will grow profoundly through 2019 into 2020.  A change is coming on Climate Change.  It has to.  Our house is on fire:

“We had everything we could ever wish for… now we probably don’t even have a future anymore.”

16-year-old climate activist Greta Thunberg says the planet’s future “was sold so that a small number of people could make unimaginable amounts of money”. pic.twitter.com/A8tu6zPrw0

Extinction Rebellion and their distinctive logo will be at the vanguard.  In April they staged a major exercise in civil disobedience in Central London: 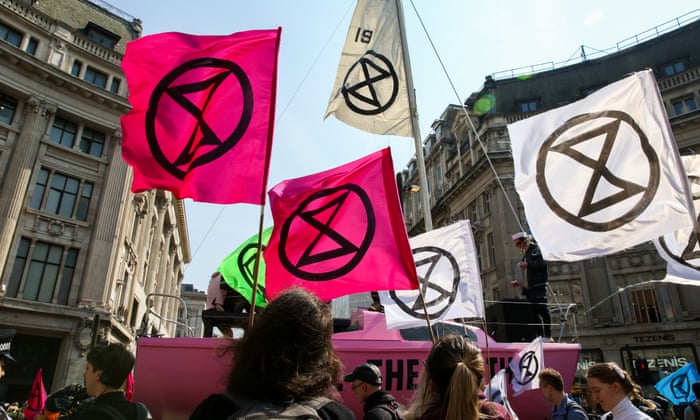 In their emphasis on practical action and a sense of urgency XR and Greta Thunberg bring to mind the dictum that the purpose of life is to be useful not happy.

It’s the 100th anniversary of Bauhaus.  Founded in 1919 by Walter Gropius in Germany and then shut down by the Nazis in 1933, “the short-lived school that changed design forever” remains influential to this day.  This Quartz Obsession provides more interesting insights into the movement:

The Bauhaus grammar—a triangle, a square, and a circle—evoked this back-to-basics mentality. They challenged everything, including the usual method of schooling. 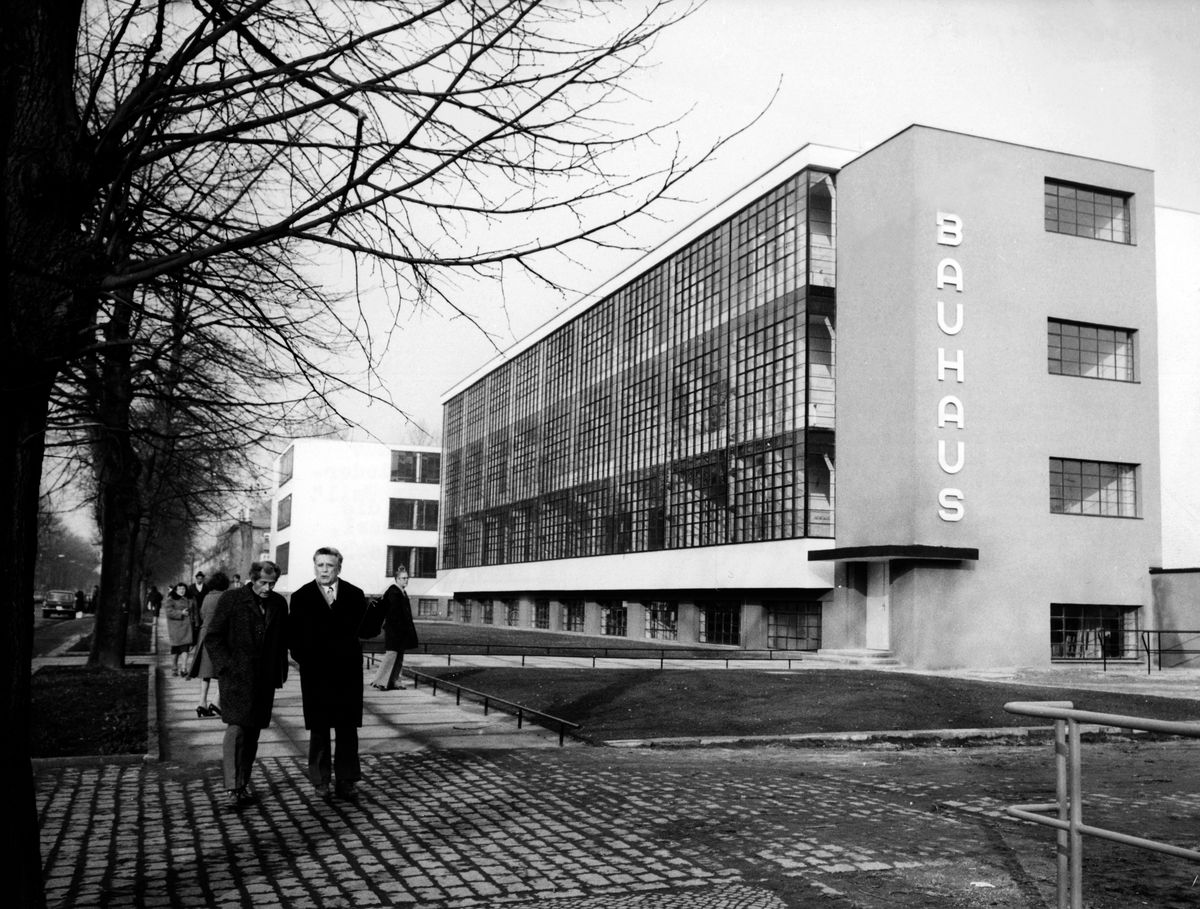 In France, the terrible fire at Notre Dame behoves us all to ask, when exactly did we stop aspiring to eternity.  The answer surely sometime in the last 30 years when we as a species were confronted the reality of the Anthropocene and realised that our civilisation may not be capable of saving us from ourselves:

The cathedral, like the symphony, is synecdoche for Western civilization’s highest cultural achievements. It is the artifact of a people who had faith in continuity, in a future, of a civilization that still believed in itself.