The Future of Truth

Sam Lessin in The Information published a fascinating post on the Future of Truth in the era of social media.  We in the West came to believe through the power of print and television in the 20th century in the notion of an objective media truth we could trust. That’s now increasingly at threat:

Technology, particularly artificial intelligence, is taking away our ability to directly observe truth. It is becoming as easy to create fake but believable images, video, and even audio as it is to create text with false claims today.

Instead people are turning to their own online bubbles for validation and diverging from a common point of consensus on what is happening. The 2017 Ofcom UK market survey provides a lot of insights into attitudes to digital media in the UK and clearly shows the impact the internet is having on traditional forms of news consumption with a trend clearly visible over as little as the last four years: 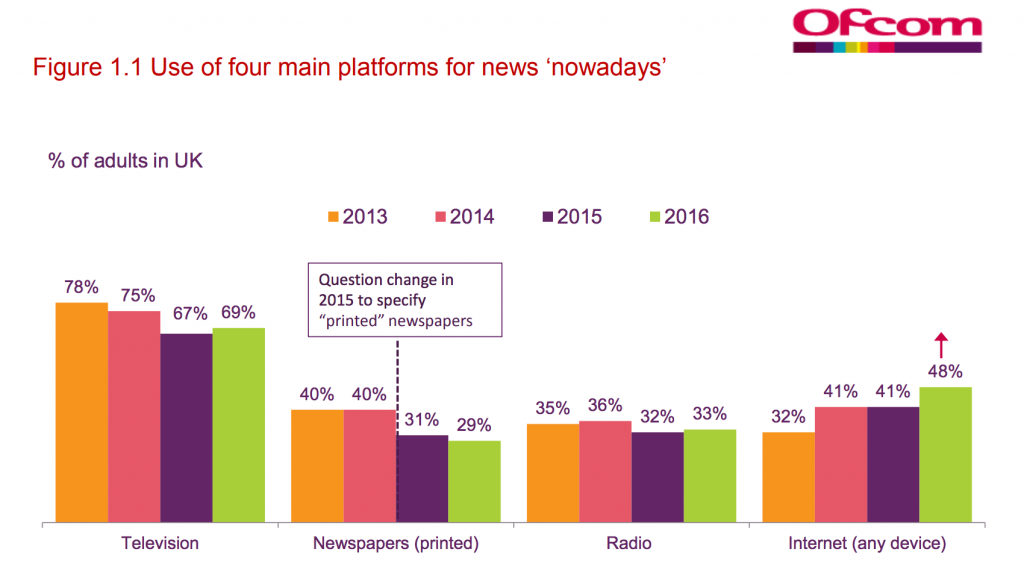 To get back to a more objective point of view, we will have to exercise much greater judgement and swim against the tide of slewed and in many cases extremely dubious sources of information:

After a honeymoon century where we could trust primary images, video, and audio—and the sanctity of the internet—we are going to have to start working harder for the truth. Technology gives, and technology takes away.

How did such a state of affairs come about?  The key to it lies in the fact that our minds have been hijacked by a handful of tech companies most notably Facebook who commandeer and groom the attention of millions through sophisticated persuasion techniques daily preying on our psychology for their own profit and feeding us what they and their paying customers believe we want to see.  Notifications, autoplay of video and outrage feeds are way markers on the “race to the bottom of our brain stem“.  In a powerful TED talk Tristan Harris, an ex-Googler suggests “this problem is the problem underlying all other problems“.  He suggests we need a mass scale self-awareness enlightenment to protect us from the power of persuasion, a Copernican revolution in our understanding of how our brains work.

The power these technologies provide the would-be or even inverted totalitarian are breathtaking.  One can see a logical endpoint which involves whitewashing the populace into believing everything is just fine. A sort of Eternal Sunshine of the Spotless Mind and it’s already happening in China:

The government doesn’t refute critics or defend policies; instead, it overwhelms the population with positive news (what the researchers call “cheerleading” content) in order to eclipse bad news and divert attention away from actual problems.

Completing the dark vision, this essay on Aeon reminds us that intelligence has always been used as a fig-leaf to justify domination and destruction particularly in the West.  The latent memory of that is why many in the US and Europe fear the rise of AI:

We would do better to worry about what humans might do with AI, rather than what it might do by itself. We humans are far more likely to deploy intelligent systems against each other, or to become over-reliant on them. As in the fable of the sorcerer’s apprentice, if AIs do cause harm, it’s more likely to be because we give them well-meaning but ill-thought-through goals – not because they wish to conquer us. Natural stupidity, rather than artificial intelligence, remains the greatest risk.

Weaponized AI is coming.  A likely first incarnation is a mass casualty drone attack which feels like it is just a matter of time:

A recent Cylance survey showed that 62% of security experts think we’ll see the first incidents of weaponized A.I. happening in less than a year.

Several aspects of artificial intelligence make its use as an offensive weapon different than anything we’ve ever encountered in the past.

Attacks can be highly individualized, carefully directed towards the greatest vulnerabilities of key individuals, formed around very specific threats, extortions, blackmails, and intimidations 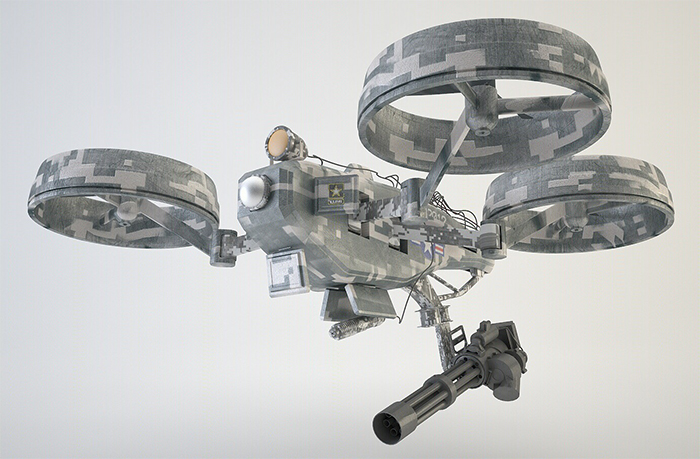 Deeplearn.js looks interesting.  It seems to cover broadly similar territory to numpy and TensoFlow albeit accessed via JavaScript.  The project came out of the Google Brain team:

Facebook language translation support is now entirely done using RNN + LSTM neural architecture.  This is a huge development and one of the biggest practical applications of deep learning that ordinary web users encounter daily without knowing or realising it:

To continue improving the quality of our translations, we recently switched from using phrase-based machine translation models to neural networks to power all of our backend translation systems, which account for more than 2,000 translation directions and 4.5 billion translations each day. These new models provide more accurate and fluent translations, improving people’s experience consuming Facebook content that is not written in their preferred language.

Really good Deep Learning project with accompanying code and detailed Python notebook explaining how the data was gathered and processed.  The dataset in this case being IMDB film ratings.

This excellent post on the AI hierarchy of needs explains why you need to build whatever you’re doing with AI and deep learning on a very solid foundation of reliable data sourcing, infrastructure, storage, processing pipelines and well-understood data cleansing techniques if you want to create a useful model: 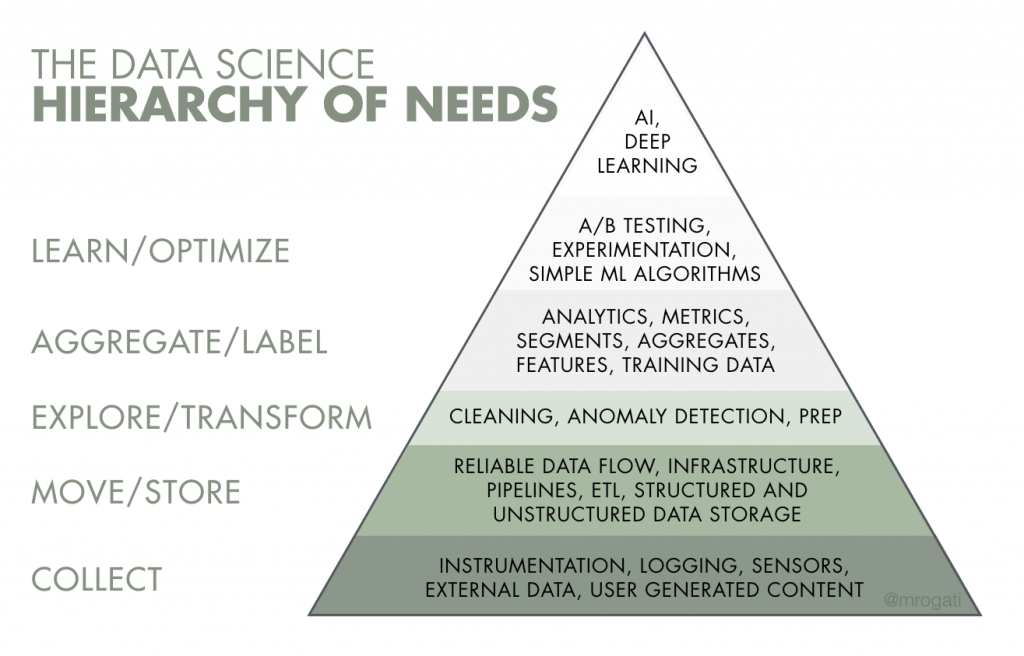 Is Amazon getting too big?  WashPo, which interestingly is owned by Amazon CEO Jeff Bezos, frames this discussion of the topic by referencing a celebrated Yale Law Journal paper entitled Amazon’s Antitrust Paradox published in January this year.  The paper’s author Lina Khan suggests that current antitrust legislation is woefully inadequate at dealing with the kind of company Amazon and its GAFA ilk represent:

Antitrust enforcers should be . . . concerned about the fact that Amazon increasingly controls the infrastructure of online commerce and the ways it is harnessing this dominance to expand and advantage its new business ventures. … Specifically, current doctrine underappreciates the risk of predatory pricing and how integration across distinct business lines may prove anticompetitive.

Netflix board member and VC Rich Barton certainly thinks Amazon scrutiny is coming and has suggested a US government crackdown on Amazon is ‘inevitable’ chiefly because it is too large to continue unbroken.

Amazon is eating media too:

Not only is Amazon competing against digital media companies for ad revenue — they’re challenging Hollywood studios for box office dominance, gobbling video distribution deals from cable companies, and launching social media and messaging networks to compete with the other major tech platforms. And their strategic investments to make money in these areas show no sign of slowing down.

And if that wasn’t enough, Amazon is also backing Andy Rubin’s new Essential phone which is now in ‘mass production’ with financial backing:

Essential confirmed it raised $300 million in funding, with the startup gaining some very important backers. Amazon, Tencent and Foxconn have come on as strategic investors, joining prior investors Playground, a startup accelerator co-founded by Rubin, and venture capital firm Redpoint.

We are in full mass production, ramping up to deliver your Essential Phone. Find out where you can get yours next week! #thisisessential pic.twitter.com/CYrhTMSt1g

Netflix and Disney are consciously uncoupling as the former moves towards a greater focus on original content and the latter thinks it can get a bigger slice of the SVOD pie currently being taken by technology-focussed newcomers like Amazon and Netflix.

The history of the human pursuit of unsolved languages “augurs badly for the eventual translation of AI languages. Perhaps when we can understand what they were saying we won’t like what we find, or perhaps, by that point, it will be too dangerous to even try.”

The culture wars have well and truly arrived in Silicon Valley in the aftermath of the notorious James Damore memo at Google:

Silicon Valley’s politics have long skewed left, with a free-market’s philosophy and a dash of libertarianism. But that goes only so far, with recent episodes putting the tech industry under the microscope for how it penalizes people for expressing dissenting opinions. Mr. Damore’s firing has now plunged the nation’s technology capital into some of the same debates that have engulfed the rest of the country.

Bloomberg on why the US economy would be better off if men did more housework.  Many one assumes already are albeit on their own given our social loneliness time bomb:

new research analyzing previous studies suggests people who fall into the loneliness trap are 50% more likely to suffer an early death than those who remain socially connected.

There’s an age-related angle because as pointed out a few weeks ago in this blog, the older you get the lonelier you get.  The modern workplace also becomes a greater challenge as this post on surviving as an old in the tech world built largely by and for those under 40 amply demonstrates:

We “elders” know perfectly well that our workplaces are by and large not about us. We don’t drive how roles, functions, advancement, and success are seen. Career development options and the hierarchical career ladders everyone is expected to climb are designed for the majority: younger workers.