Artificial Intelligence is going to be different from all previous technology waves.  It has a relatively low barrier to entry and is essentially largely decentralised which gives it significant innovation potential, more so than other recent software advances: 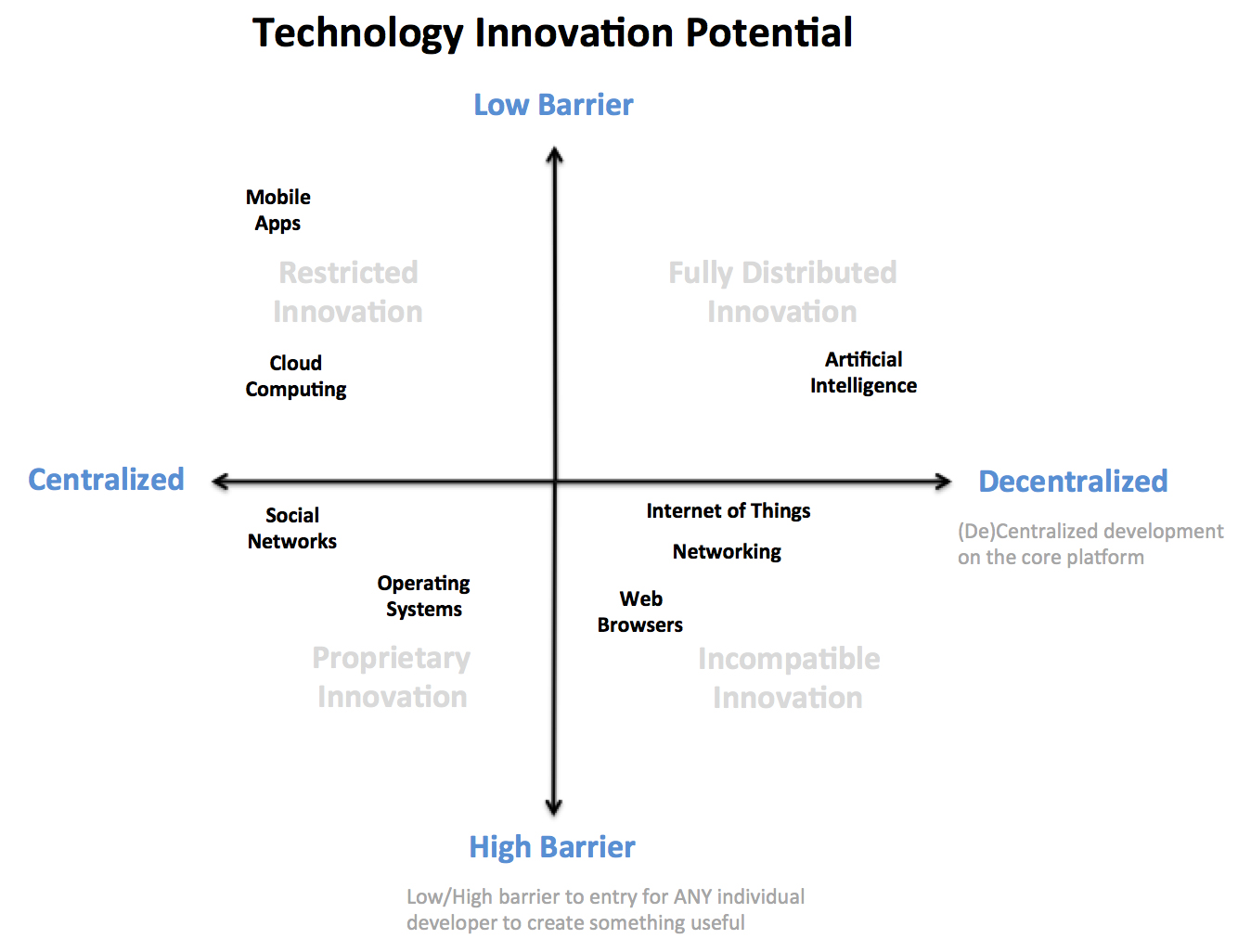 This is optimal in terms of an environment that fosters innovation. Not only can individual developers create because the barrier to entry is low, but they can also build their own platforms. AI is the only technology I’d put in this quadrant, and I’ll discuss the reasons for that in the next section.

But there is a significant catch:

There is a low barrier to entry to develop AI solutions, but it requires a high level of technical knowledge. This is an important difference from mobile apps, which also have a low barrier to develop. Where app stores are marred by numerous crappy apps, unless you are a serious developer with access to significant data, you won’t be able to do much with machine learning. As a result, the average AI app will be higher quality.

Part of the reason for this is that you need significant skills to interpret the data that a model produces to understand what changes need to be made to improve it.  As Peter Norvig explains, the introduction of AI into the world of commercial software development radically changes the nature of software engineering workflow:

Perhaps appropriately then 25 years on after it’s launch, the Guardian profiled seminal Warp Records album Artificial Intelligence which gave birth to the whole IDM (intelligent dance music) scene.  Back in those naive days, AI was seen as exciting and redolent of the future we were promised in the 20th century.  Not sinister and the baleful harbinger of evolutionary change many see it as today.

In a few years no investors will be looking at AI startups because it will simply be assumed that every business is an AI-business:

investors will stop looking for AI-powered startups in exactly the same way they don’t look for database-inside or cloud-native or mobile-first startups anymore. All those things are just assumed.

As pointed out before in the blog both here and here, the simulation hypothesis is en vogue right now and an almost perfect fit as an alternative religion for secular techno-utopians to gravitate towards. No surprise therefore to hear that experiments to find evidence for it are being financed by leading tech billionaires:

“Many people in Silicon Valley have become obsessed with the simulation hypothesis, the argument that what we experience as reality is in fact fabricated in a computer,” writes The New Yorker’s Tad Friend. “Two tech billionaires have gone so far as to secretly engage scientists to work on breaking us out of the simulation.”

A CIRP study suggests that Amazon Prime membership has reached 85 million plus in the US “which is up 35 percent from the year-ago quarter and double from two years ago.”  Not everyone agrees it tallies with Amazon’s actual figures:

Morningstar suggests the figure is more like 69 million but that the key fact is that it is approaching that of household cable TV subscriptions: 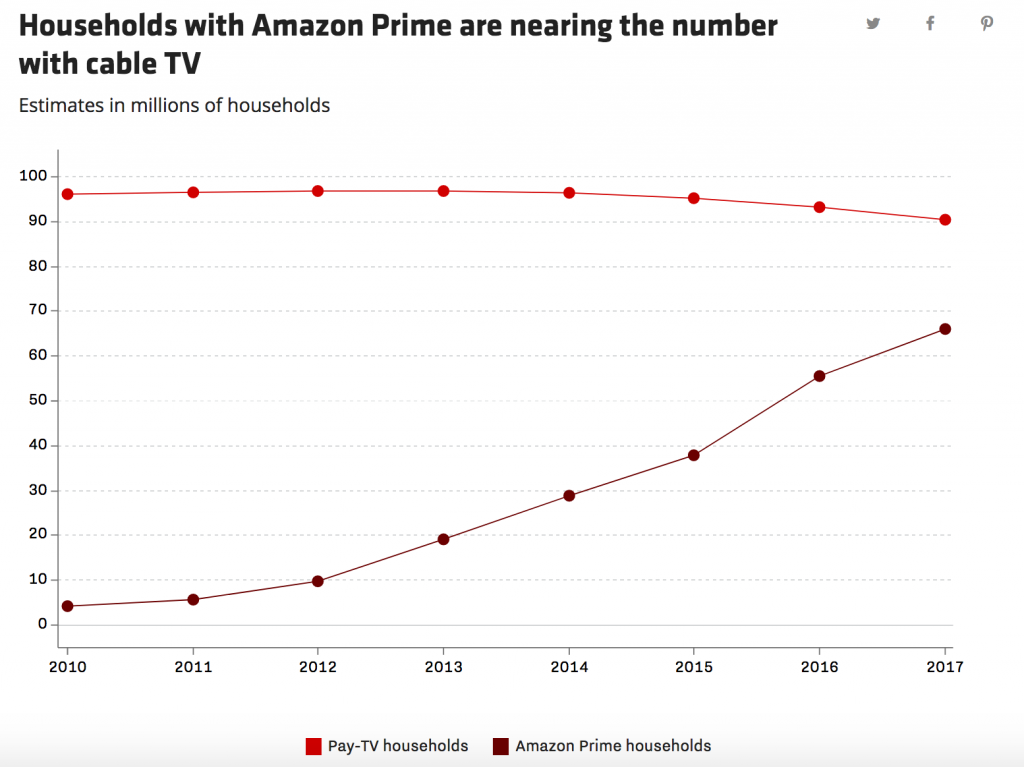 Apple TV too is losing out against Prime:

Apple’s (NASDAQ:AAPL) market share for renting and selling movies is downto between 20% and 35% after being over 50% about five years ago, sources tell The Wall Street Journal.

Market share gains were recorded by Comcast (NASDAQ:CMCSA) and Amazon through its Prime service over the same time period.

It’s enough to make you roll your OLED:

The industry expects that rollable TVs will encourage people to install larger screens – that can be hidden when not in use – in living rooms. As Brexit concerns starts to hit home, the evidence is mounting that Berlin is increasingly the place to be at for European tech startups.

The $88 Panda OBD II car adapter is a “Fitbit for your car”:

Panda is a tiny black and white dongle you port into your car to gather the data and should not come under the same type of regulatory scrutiny as the Comma One. Dongles like Panda are used by most mechanics, and other platforms like Automatic and Mojio operate using these types of car interfaces. … Panda can give you a wide range of data just by plugging into your car’s OBDII port (something every car made after 1996 should have). The dongle comes equipped with both USB and Wi-Fi capabilities and also can charge your phone while on the go. 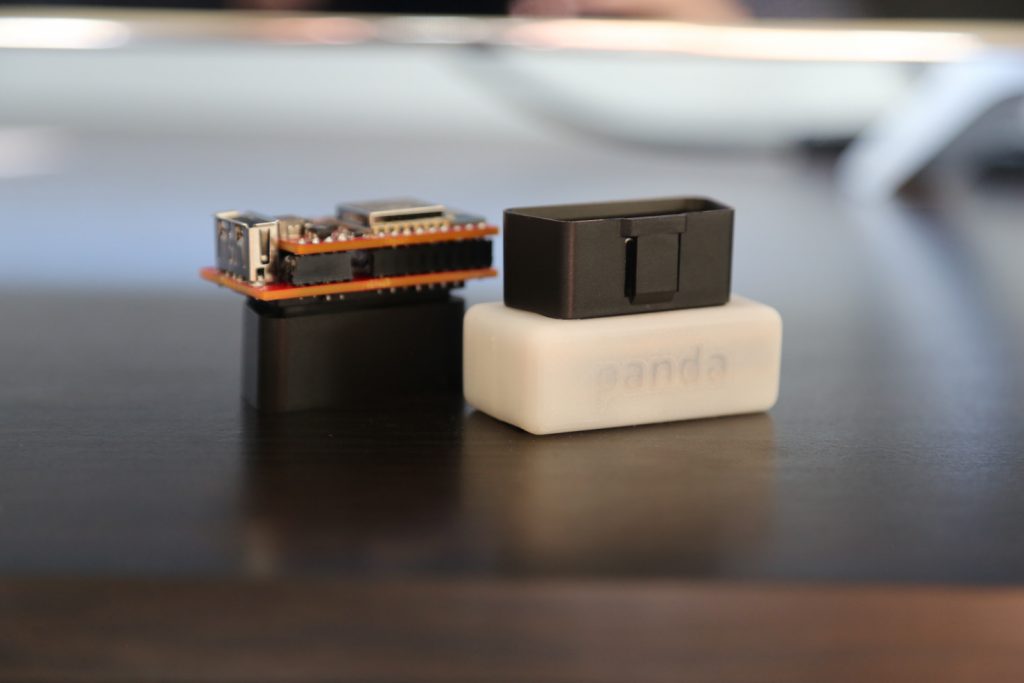 Meanwhile one-time wearable computing startup JawBone once worth $3 billion flew too close to the sun and crashed and burned and is now to be liquidated.  It’s founder will live to fight another day in another health startup:

Jawbone’s fate underscores the deep, deep dilemma of American business. It’s increasingly difficult for a small upstart to gain enough momentum to become the next Apple or Facebook. The best one can hope for is an aquisition, and if not that, then, well…

Its results not the hours you put in that count.  Even so plenty of old school dinosaurs into presenteeism will be heart-warmed by the ultimate panopticon cautionary tale courtesy of old school Bill Gates who probably doesn’t practice this any more at his Foundation:

“I knew everyone’s license plates,” Gates said, “so I could look out in the parking lot and see when did people come in, when they were leaving.”

How Atlassian boosted its female hires by 80% by dropping the axiomatic belief that their company was a meritocracy and starting to institute change immediately.

Apparently the secret to better brainstorming is to pivot to a HMW mindset:

To avoid these pitfalls [of brainstorming], the design firm IDEO has developed a brainstorming strategy that relies on three simple words: the phrase “How might we.” [HMW]

Good heads up on five key tips to learn a foreign language faster.  Surely everyone is aware of the importance of immersion by now?

Wired on the secret world of online teens in the UK and “how streaks, deep likes and ghosting define young lives“.  The subject matters reflect teen preoccupations down the generations but the medium is most definitely different.

The New Yorker on American Dignity on the 4th July.  There isn’t any.  In amongst the riches of embarrassment lies the news that the White House is now empty of anyone in the office of science and technology policy: