The Arrow of Time

Physicist Carlo Rovelli’s latest book on the nature of time is a mind-bending and exhilarating read.  In it he posits that the notion of objective universal time doesn’t exist and that “chronology and continuity are just a story we tell ourselves in order to make sense of our existence“.  Rather than the passage of time what is happening is constant change and transfiguration, a perspective that resonates with the teachings of Taoism like wu wei:

there are actually no things at all. Instead, the universe is made up of countless events. Even what might seem like a thing—a stone, say—is really an event taking place at a rate we can’t register. The stone is in a continual state of transformation, and on a long enough timeline, even it is fleeting, destined to take on some other form. … In the “elementary grammar of the world, there is neither space nor time—only processes that transform physical quantities from one to another, from which it is possible to calculate possibilities and relations”.

Rovelli suggests that at the quantum level “durations are so short that they can’t be divided and there is no such thing as time” or entropy, only endless changes in state like the flowing of water.  We are deeply driven by our narrative self to attribute meaning and significance to all the things we experience in our human lives and in order to do so our minds construct a personal sense of time and its passage for explanatory convenience:

time is a story we’re always telling ourselves in the present tense, individually and together. It’s a collective act of introspection and narrative, record-keeping and expectation, that’s based on our relationship to prior events and the sense that happenings are impending. It is this tale that gives us our sense of self as well, a feeling that many neuroscientists, mystics, and the physicist argue is a mass delusion.

This fascinating blog post from OpenAI highlights the incredible progress in the amount of compute power being applied to address AI over as little as the last five years.  Four distinct architectural groupings have emerged over this period:

The graph below maps key proposition landmarks across this timescale and also serves to illustrate just how much Google dominate and lead the field today: 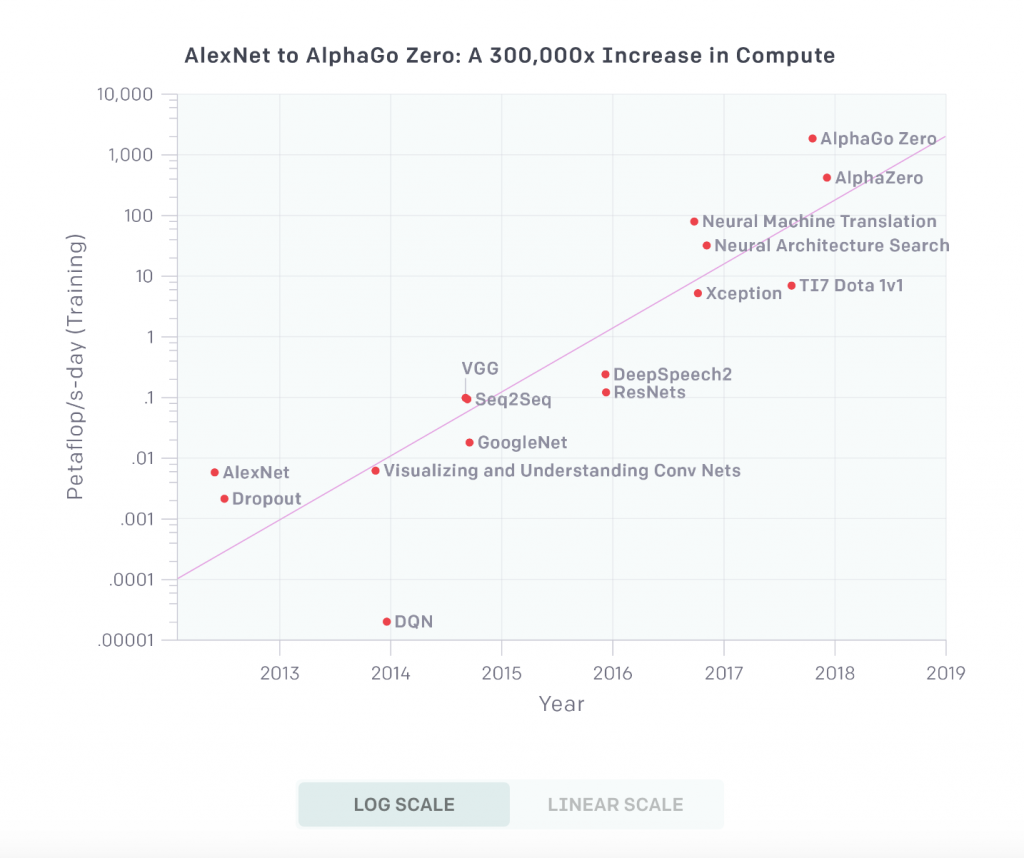 It’s not hard to agree with the implied conclusion that we are undergoing exponential changes in AI architecture that will have the most profound of consequences for all of us over the coming years given the current rate of progress:

“Improvements in compute have been a key component of AI progress, so as long as this trend continues, it’s worth preparing for the implications of systems far outside today’s capabilities.”

A Chinese port is on track to be fully automated by the end of this year:

Caofeidian is set to become the world’s first fully autonomous harbor by the end of the year. The US-Chinese startup TuSimple, a specialist in developing self-driving trucks, will replace human-driven terminal tractor-trucks with 20 self-driving models. A separate company handles crane automation, and a central control system will coordinate the movements of both.

Meanwhile The Guardian on how robot technology and the threat of technological unemployment are casting a spectre over the large call centre workforce in the UK.

VentureBeat on everything Google announced at IO 2018 from Google Assistant, Chrome OS, Android, Google News and Waymo.  Unsurprisingly AI was a common connecting theme with Google Duplex technology for natural language conversation perhaps the most interesting development.  This white paper outlines how Duplex is supported by an RNN built using TensorFlow.  At IO, Google CEO Sundar Pichai used it to make a call to schedule a haircut without any human involvement. It’s an uncomfortable companion piece to the last link on call centre automation:

The extent to which the data gathered by such tools could be used by Google to build something altogether more sinister was highlighted by the furore over the Selfish Ledger video obtained by The Verge which went beyond even The Circle with it’s vision of an enduring multi-generational store of data added to and passed down over time like an heirloom.  The choice of name seems a deliberate reference to Richard Dawkins Selfish Gene:

The way we use our phones creates “a constantly evolving representation of who we are,” …  a “ledger,” … these data profiles could be built up, used to modify behaviors, and transferred from one user to another.  The so-called ledger of our device use — the data on our “actions, decisions, preferences, movement, and relationships” — is something that could conceivably be passed on to other users much as genetic information is passed on through the generations.

An insightful Quora response from a former 10-year Google engineering leader on how many people at Google use Python:

A quick and simple definition of microservices from OReilly:

with a helpful reminder that:

“In a microservice architecture, the services tend to get simpler, but the architecture tends to get more complex. That complexity is often managed with tooling, automation, and process.”

Quora question on which of AWS, GCP and Azure are the best cloud platform to pick today.  Unless you’re reliant on Windows or have particular big data/machine learning requirements to support, you’re probably best off with AWS as Gartner’s 2018 Cloud Infrastructure as a Service report indicates: 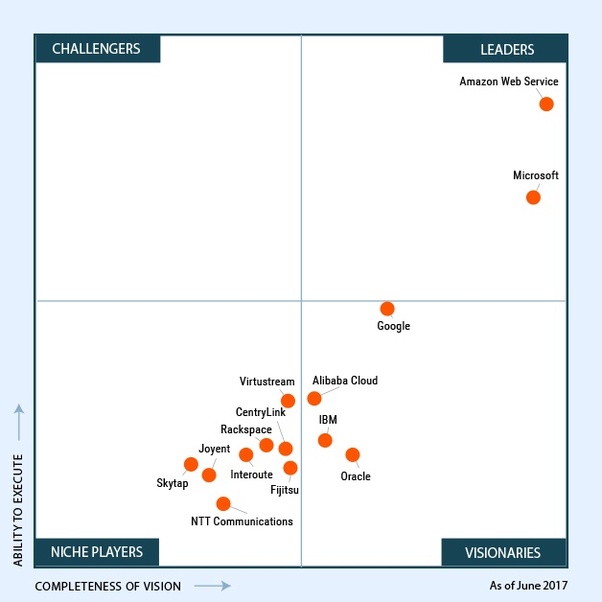 Bragi, the company that bought us Hearables, appear to have turned their software into a platform proposition called NanoAI supported by a sensor-rich HW development kit aimed at smart IoT use cases.  Underpinning it is BragiOS:

Written in portable C99 BragiOS is an embedded operating system that provides access to highly configurable machine learning, advanced mathematics and statistical operations on tiny devices. It comes with an advanced toolchain for configuration of applications and the debugging and deployment of devices. The behaviour of the device is controlled by a JSON configuration file which can be updated at any time to modify the device behaviour.

Interesting post outlining how The Economist builds digital products.  Being humble, having a hypothesis-driven software development culture focused on continuous improvement and responding to customer feedback are all name-checked.

Matt Asay with a withering riposte in The Register to the techno-utopians preaching that we blockchain all the things in which he points out several key limitations with such an architecture not least of which is that it puts the onus on us to be more knowledgeable and aware of privacy concerns than we are:

And that’s before we begin to consider bitcoin’s exponential energy consumption recently profiled by Grist:

Bitcoin’s energy footprint has more than doubled since Grist first wrote about it six months ago. … It’s expected to double again by the end of the year, according to a new peer-reviewed study out Wednesday. And if that happens, bitcoin would be gobbling up 0.5 percent of the world’s electricity, about as much as the Netherlands. … If that keeps up, bitcoin would consume all the world’s electricity by January 2021.

It’s a collective madness we seem afflicted by that seems at least in resource completely unsustainable:

It’s a telling social phenomenon of late capitalism that we are willing to construct elaborate computer networks to conduct secure transactions with each other — and in the process torpedoing our hopes at a clean energy future.

Blockchain skepticism is a good segue into this TechCrunch post outlining why technical ignorance does not constitute leadership:

ignorance of technology is increasingly untenable. Decisions are only as good as the implementation that results. … Changing times require adaptable leaders, and today those leaders need tech literacy just as much as our grade-school children do. It’s the only way leadership can move forward today.

One leader who has a track record of astute investment and an expansive vision of technology in society in SoftBank’s Masayoshi Son. Both The Economist and Bloomberg point out that his huge $100billion tech fund will have the most profound impact on society and potentially shape the direction it takes over the next few generations.

Powerful post from author Rebecca Solnit on how being a woman feels imprisoning to her at times in ways that men simply cannot understand or experience:

In particular, I’ve wanted to be able to walk around alone, in cities, on mountains, unmolested. You can’t wander lonely as a cloud when you’re always checking to see whether you’re being followed, or bracing yourself in case the person passing grabs you. I’ve been insulted, threatened, spat on, attacked, groped, harassed, followed; women I know have been stalked so ferociously they had to go into hiding, sometimes for years; other women I know have been kidnapped, raped, tortured, stabbed, beaten with rocks, left for dead. It impacts on your sense of freedom to say the least.

The American hegemony that was the constant standard bearer of liberal democracy throughout the fractured 20th century humanist wars is in now in full decline accelerated by Trump.   It’s a theme echoed in David Runciman’s book ‘How Democracy Ends’ which has just been reviewed in The New Statesman by John Gray:

The uncertainties surrounding democracy have two dimensions, one domestic and the other global. Internally democracies are faced by varieties of what is loosely described as populism – the rejection of established political elites and their policies. Externally democracy is confronted by the fact that dictatorship may be accepted and supported as legitimate by large majorities in countries where it prevails.

After a century of supremacy, it is increasingly clear we are approaching a critical juncture, a pivot point in history:

“Democracy is no longer the only game in town.” In this short sentence, David Runciman states the most important political fact of our time. …  There is nothing special about liberal democracy, and no guarantee that it will survive the demands that modern populations make on those who rule them.

In America, Trump’s dismantling of international trading norms signals an existential crisis for the neoliberalism creed that Western liberal democracy gave rise to 30 years ago.  It may well end up resulting in new alliances outside of America influence evidenced by the growing imperial trading ambitions of China notably with other countries that are not liberal democracies. The specific example of recent trading developments between Iran and China are a case in point.  In the UK as well, liberal democracy is under serious assault from hard-line Brexiteers who Marina  Hyde compares to English football louts in this brilliant sketch:

the customs endgame is starting to feel like a warm night in a European square, with England two disastrous matches into a tournament. Rees-Mogg is already in a plastic tommy hat and eyeing the cafeteria furniture – the analytic equivalent of the fan who thinks the reason the side aren’t doing well is because they aren’t playing with enough “passion”. They don’t want it enough, was basically his verdict this week on the UK’s negotiators.