Donald Trump’s Presidential inauguration speech on the 20th January painted a picture of a dark and troubled country awaiting rescue from a robust nationalist politics under the broad label of America First.  It’s a term that also has a dark and troubled past as outlined this week by The Atlantic. The phrase is strongly suggestive of a form of exceptionalism that runs right through the various global populist movements.  Every one of them thinks their position uniquely privileged, that their own country is special or chosen.  The psychology of exceptionalism in clearly evident in Brexit case too where the results amply demonstrated that the English don’t want to be part of anyone’s team.  We will soon enough have plenty of time enjoying being in a team of one:

Those who voted Leave in the referendum were not voting about globalisation or stagnating living standards or austerity and declining welfare payments, they were voting about the EU, and it is condescension to pretend otherwise. But they were not being asked by the Leave campaign to express a preference for a particular rationally argued and practically feasible economic and political alternative to membership of the EU – that is evident, for none was offered before the referendum and none has emerged since. They were being asked to express an emotion about membership, and the English, but not the Irish or Scots, felt so urgent a need to express it that they threw reason and practicality to the winds.

Meanwhile a Chinese student has decoded the exceptionalism espoused by Trump and suggested it too is hollow:

“I’ve always seen American democracy as a second-rate democracy, because the parliamentary system is better in nearly every way.”

One suspects as Politico predict, international trade is more powerful than Donald Trump and “is controlled far more by the demands and needs of a booming global middle class and a robust affluent class than it is by tariffs or trade agreements” like TPP or NAFTA.  That in turn limits what practical impact any one individual no matter how self-important or exceptional can have.   Trade is one thing bug Trump will have an even more impossible time turning back the tide on the surge to robotic automation in manufacture:

Factories today, however, are output machines, not job machines. A new factory employs hundreds of skilled workers, adept at robot programming or high-end value-add work; it does not employ thousands of shift workers. The myth of manufacturing today is that jobs will come back, but most of the jobs that disappeared over the past decades can never exist again. Period. American withdrawal from the TPP, or changing the terms of NAFTA will not alter that.

The social impact of unrequited expectation in the precariat that has invested so much in Trump is unknowable but it seems very plausible that state surveillance will be significantly ramped up to weed out the unpatriotic if civil unrest occurs. In these increasingly dangerous times protecting your privacy has never felt so urgent.  This Buzzfeed article offered up a handy compendium of essential tips of how to survive Trump’s America – use end-to-end encryption, TFA and HTTPS everywhere.

Automation is already happening according to a recent McKinsey report flagged in this blog last week and picked up on this week on LinkedIn: 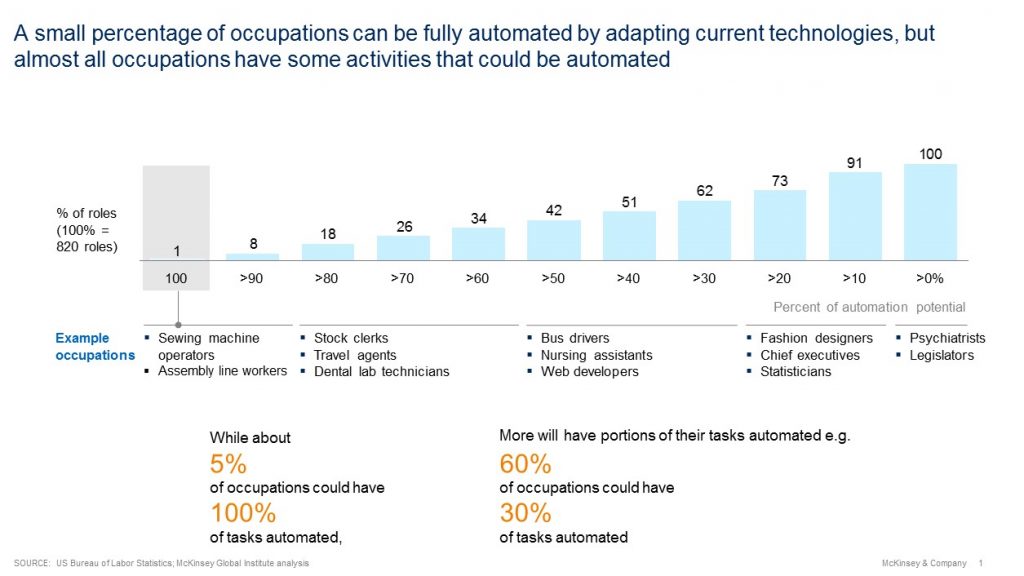 Cars of the future will be computers with wheels.   It’s leading some to engage in wishful thinking in thinking it will revive past glories. See for example this article from the Head of Consulting and Services at Microsoft.  90% of  cars in 2020 may well have a computing platform at their core but how many will use this technology?

OReilly on seven AI trends to watch in 2017.  1, 2 and 3 will combine with a progressively greater flywheel effect over the coming year:

Google’s Ara dream is over. VentureBeat chronicle the roller coaster rise and fall ride of ‘the world’s most revolutionary phone‘:

Wired on Xiaomi’s plan to be the number 1 player in the connected home with their Mi Home hub and why they might pull it off:

Everyone wants to build the one system that unites all things, the sole platform for all the connected thing in your life. If one company could not only build the platform, but the things as well, it would change everything. And it may only be possible if that company is made in China.

Despite being heavily quoted in the article, it’s a vision that won’t involve ex-Xiaomi VP Hugo Barra, however.  He has announced he is leaving the company after 3.5 eventful years and heading the other direction, moving back to the US to join Facebook.

Go was the programming language of the year in 2016 according to Tiobe gaining more % points than any other.

What should I learn after JavaScript?  Simples.  ReactJS:

The most hottest right now (Oct 2016) is React and React Native, here are two tutorials which will help you to understand better how does it work:

Interesting post on replacing user stories with job stories in which this familiar formulation: is replaced with this: