A Question of Trust

The Information on the techlash and why it is better to be trusted than liked:

Trust is much harder to build than likability. We can’t see executives make decisions so we doubt their motivations. It’s even harder when tech comes out with products or services that kill jobs in other industries. Just ask the media business.

The key to building trust is a product that helps an individual, not an abstract cause or concern, and a highly transparent business model. I trust Amazon because I can tell how it makes money by looking at my credit card statement. And I believe that it is charging me a low price to keep my business.

Continuing the theme highlighted in last week’s post on tech ethics, FirstRound published a post on how an organisation can diagnose and build trust with the help of an equation: 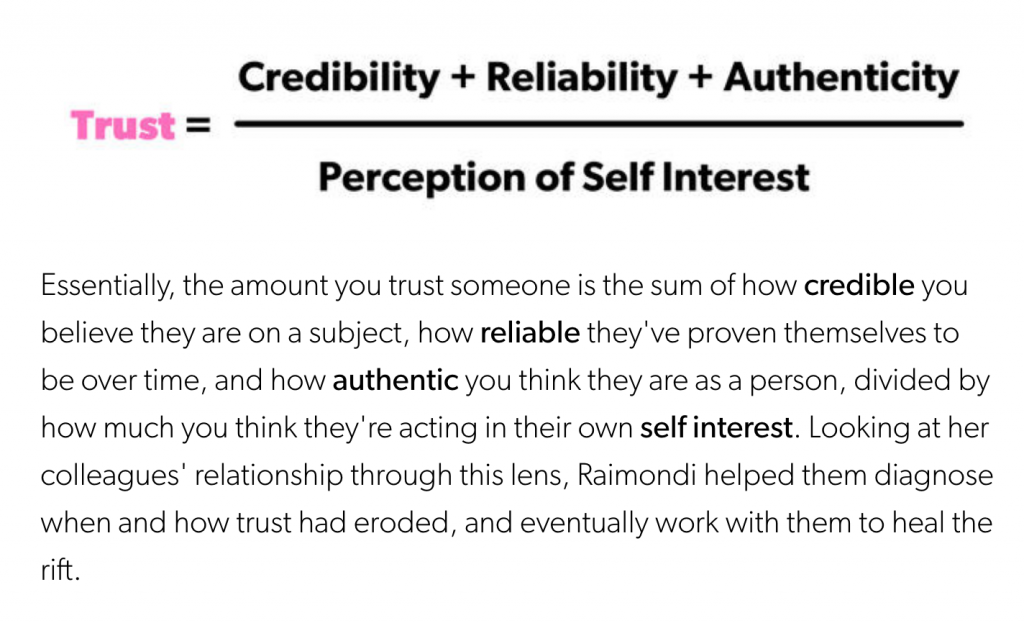 Elon Musk and Mark Zuckerberg are also fighting over what amounts to a matter of personal trust in asking whether we rule technology or it rules us.

Amazon 2018 predictions from Blue Dot Partners are bad news for anyone competing with them.  The bulldozer is coming and 2018 should see Amazon move closer to becoming the world’s largest software company:

Growing about 40%, it may pass SAP in 2018 to become the fourth largest software company in the world behind just Microsoft, IBM, and Oracle.

Donald Trump’s ‘war against Amazon‘ is at heart an attempt to turn back the clock so is not likely to be a winning or desirable strategy long-term in view of the accelerating rate of technological change in the 21st century:

At the core of the issue is Trump’s old-school view of the American economy – he prizes the physical and the industrial over e-commerce and the transformative impact that the Internet had in pushing the US inexorably toward a services economy.

Politico like many other analysts see Bezos’ ownership of the Washington Post as a key element of Trump’s irritation.  WashPo has consistently held an anti-Trump line since the early campaign trail.  The president messes with Amazon at his peril.  As Quartz point out, more US households subscribe to Amazon Prime than voted for Trump in the 2016 US election.  Furthermore:

Consider that Prime households actively pay around $99 per year to Amazon, while Trump voters merely had go out and cast a ballot, and the tech giant wins the popularity contest hands down.

Benedict Evans muses about the standard model of autonomy in terms of self-driving cars and using the parallel of how mobile looked in 1998 and how it turned to illustrate how inherently difficult it is to predict anything: 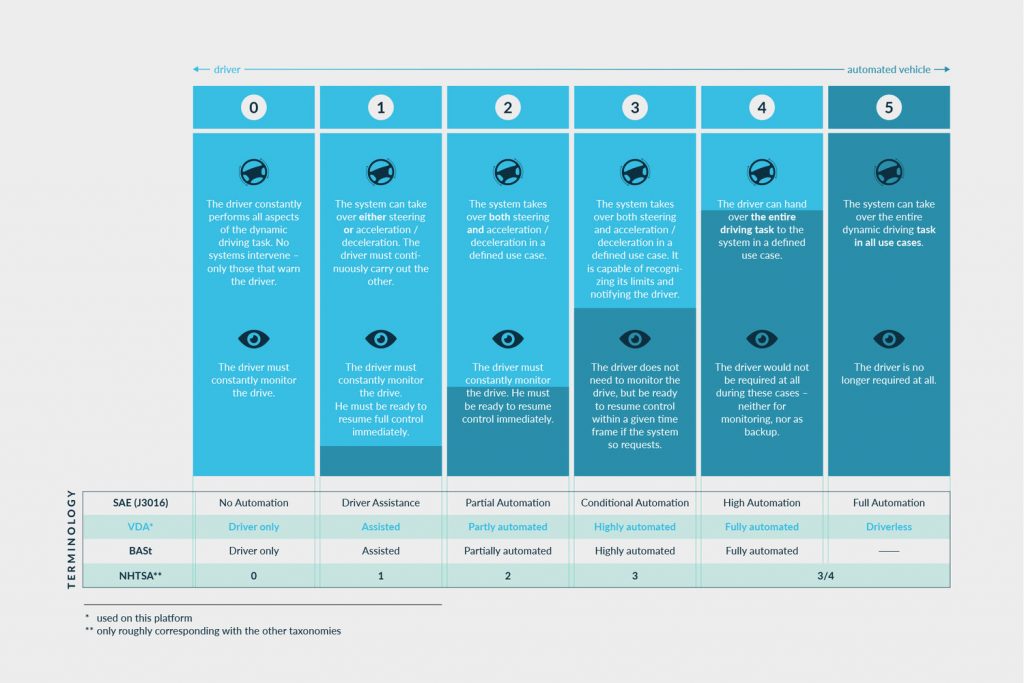 One of the key announcements at the summit was the introduction of tensorflow.js, an attempt to allow JavaScript developers to have the same level of access that .  With the new support you can support the following important use cases: a) import an existing, pre-trained model for inference, b) retrain an imported model, c) author models directly in the browser.

Meanwhile this is a great practical intro to TensorFlow: 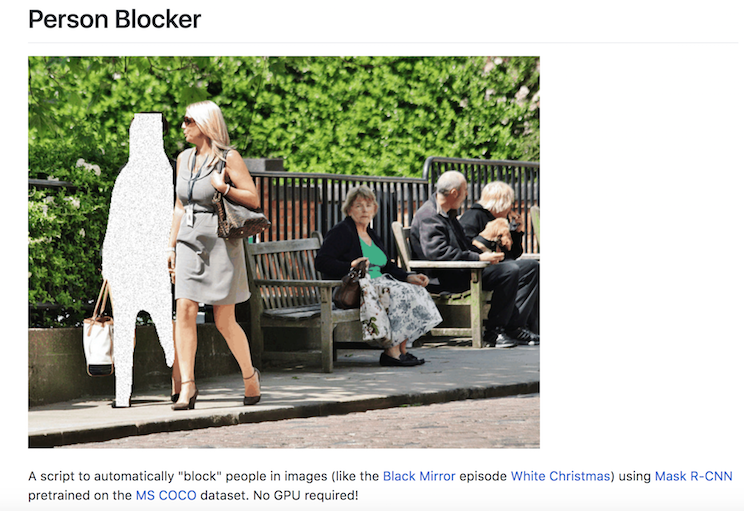 starting today, developers will get access to the same DeepMind-developed text-to-speech engine that the company itself is current using for its Assistant and for its Google Maps direction.

It’s not all forward progress for Google though.  In a major coup, Apple have just poached Google’s AI chief John Giannandrea.

Long read in the Guardian on how babies learn and ‘why robots can’t compete‘.  It’s all to do with all work and no play making Jack a dull robot:

Creative play is the foundation on which creativity, language, maths and science are built. If you start too early with flashcards, you lose this developmental stage.  “It’s about being free.  It’s about risk-taking.” … More than words, it took a human being for a baby to learn language. They could not learn from screens.

a survey of mobile users across the United States and United Kingdom revealed customers prefer the experience of digital-first companies, with 73 percent saying they wish their mobile service provider operated more like Amazon. PayPal, Netflix and eBay also ranked high in digital experience, with respondents highlighting favorite features including ease of use, clear pricing structure, real-time access to services and the ability to personalize.

Reputation inflation explains why you should avoid leaving your Uber driver anything less than five stars – everyone else is doing it:

Great Medium post on becoming a new manager of managers is about becoming a role model, leading through others and ramping up responsibilities.

Seven common speaking habits that undercut your credibility seem to bring to mind Alan Partridge.  Does anyone really do this?

Word of the day is Shturmovshchina.  You’ll probably recognise it even if you haven’t heard the term before:

Entertaining Alan Kay Quora response to a question about a comment he once made on Linux being ‘a budget of bad ideas’.

Fascinating, timely and excellent example of the utility of BeautifulSoup used in this case by the author to analyse 10 years of Facebook data:

Facebook has an option to export a data dump of “everything” they have stored for your profile. I decided to download this and see what juicy details I could find. … The structure of the data export appears to be consistent, so I made a Python script to parse and aggregate the statistics mentioned in this post using BeautifulSoup to traverse the DOM of the HTML files. To use this script on your own Facebook data dump, first export your data and then go to my GitHub repo and download the facebook.py file.

The best programming languages to learn in 2018 according to this blogger based on a variety of metrics include the three I have a personal interest in focussing on – Python, JavaScript and Rust: 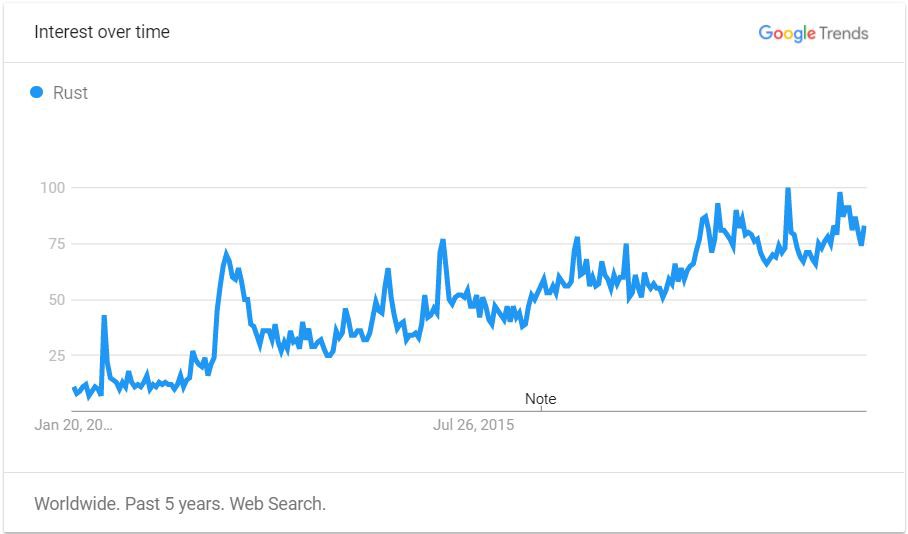 NYT on the remarkable story of how 2001’s HAL got his creepy voice.

Quartz on why Utopia and those who champion it are dangerous in their idealism and why we should aim instead for protopia, or kaizen political theory if you will.  The argument echoes some of those made by Yuval Harari in Homo Deus where he discusses the limits of the three humanist creeds that dominated the 20th century landscape focussing on liberal, socialist, evolutionary teleologies:

Protopia is a state that is better today than yesterday, although it might be only a little better. Protopia is much much harder to visualise. Because a protopia contains as many new problems as new benefits, this complex interaction of working and broken is very hard to predict.

Historian Gil Troy on why Trump has committed ‘a crime against the American People‘ by utterly failing to heal a divided country:

Trump and madman theory – with North Korea and other issues, either he’s playing crazy or he really is.