The Legend of the Mighty Fall

“Because strait is the gate, and narrow is the way, which leadeth unto life, and few there be that find it.”

The death of Mark E. Smith founder of cult pop group The Fall stemmed depressingly early at just 60 brings to a close the life of a unique musical visionary admired by many who had their formative musical experiences in the last century.  Right to the end Smith did it his way and his way was usually the most compelling and hypnotic way even when the results resembled a car crash to those that weren’t familiar with his ouevre.  Most notably at the legendary NYC Brownies gig which retains a grim, morbid fascination twenty years on.  An inevitable swathe of obituary articles have tried to assess his influence.  Dave Simpson’s post is perhaps the most vital given his own personal history trying to locate all the musicians that had ever played with The Fall.  He paints a picture of a largely self-taught working class man unshackled by the 70’s punk DIY ethic when it was possible to imagine a new dawn for autodidacticism that has now faded in the UK. Smith remained idiosyncratic, contradictory, unpredictable, irascible and essential throughout his career:

The Fall’s output was so prodigious and varied over a 40-year period it’s impossible to do justice here though the Guardian tried with an ‘essential’ list of 20.  On a personal front, the band felt at their best when purveying a form of dark musical science fiction. The track Blindness from their later years is an exemplar.  A bleak, relentless sonic pile-driver that builds and grows in intensity going on and on without release.  It was performed on the same episode of Later that forbade Holland’s piano accompaniment.  As if. This version live at the famous last ever gig at the Hammersmith Palais in 2007 delivered by a 50-year old man remains astonishing.  Most bands struggle to produce anything like this level of rhythm and control mixed with sullen angry menace even once in their entire careers:

Yet The Fall did it again and again with different musicians and Smith the constant up front. Big New Prinz for instance, one of their earlier hits from their 80’s peak, remains an aggressive, grunge masterpiece with touches of glam from their pre-synthesizer era.  This version from thirty years ago has a younger more earnest Smith lavishly introduced by Tony Wilson founder of Manchester’s Factory Records as a prophet in the making – “if there was a holy grail, Mark E. Smith would be the only one allowed to pick it up“:

Although an innovator, Smith was suspicious of social media and one suspects he would have approved of this advice provided by Vanity Fair vis-a-vis Facebook who, at least based on the media barrage they’re currently under, are experiencing a Fall of their own:

As a society, we feel like we’re at war with a computer algorithm, and the only winning move is not to play.

Of course, The Fall had a song for this too in Facebook Troll.  This performance appropriately enough from Manchester Cathedral in 2014 has an unbound wild inchoate angry energy with the often incomprehensible rambling of Smith carried by a relentless beat as he appears to rail against fake news about himself.  The Mighty Fall as they were often called produced a collected body of work that is entirely unique and original.  The legacy of Mark E. Smith will, one suspects, stand the test of time and grow in influence as testimony to a complex, fallible and entirely human creative force from an era before manufactured music.

What would Mark E. Smith have made of a crawling robot baby?

The Onion on the money again:

Dazed Jeff Bezos Realizes He Spent Entire Conversation Thinking About How To Automate Person Talking To Him https://t.co/7i5YLDbZw8 pic.twitter.com/wVn82sBoRY

Michael Schrage, author of the excellent Serious Play, outlines the dangers of “murder by machine learning” becoming the new “death by powerpoint“ as AI and Machine Learning powered decision-making is afforded ever greater legitimacy in the corporate environment:

It’s precisely because machine learning and artificial intelligence platforms are supposed to be “smart” that they pose uniquely challenging organizational risks. They are likelier to inspire false and/or misplaced confidence in their findings; to amplify or further entrench data-based biases; and to reinforce — or even exacerbate — the very human flaws of the people who deploy them.

Ring, the smart doorbell maker, is close to a unicorn status in large part driven by the growth prospects for both smart home security and automated home delivery both of which they cover.

Wired profile Maria Klawe who has years of insight to draw upon on what encourages more diversity in tech and why it is critically important to do so:

What’s facing us is a very, very different future. The haves will be the people who have the skills that are needed, and the have-nots will be the people whose skills are no longer needed—because of automation, because of AI, because of robotics. We don’t know how fast certain kinds of routine jobs will go away, but we do know it will put a further income gap between people who have that kind of education and knowledge and people who don’t. If there are not many women, or people of color, or older people, or low­-income people getting that technical education and those technical jobs, it’s going to further polarize the situation in the country.

However it remains more of a chimera than ever before given the wider political divisions within US society.  Wired also suggest in another post that the fracture lines are responsible for creating the conditions for the poisonous dirty war on diversity currently being waged inside Google and other Silicon Valley companies:

The complaints underscore how Google’s freewheeling workplace culture, where employees are encouraged to “bring your whole self to work” and exchange views on internal discussion boards, has turned as polarized and toxic as the national political debate.

It’s part of a broader disillusion with Silicon Valley tech which is beginning to pervade the culture.  It was touched upon in the Vanity Fair piece on Facebook’s downward spiral highlighted above.  It’s also clearly visible in this NYT post on how the Democrats have fallen out of love with the tech giants broadly as a result of fake news and Russian attempts to influence the US election:

Fundamentally, the problem is that “disinformation campaigns and legitimate advertising campaigns are effectively indistinguishable on leading internet platforms”

Famous Googler Steve Yegge has added a contribution of his own in a surprisingly damning post in which he announces he’s leaving to become CTO of Grab, “the biggest startup in the history of Southeast Asia“.  As ever he remains eminently quotable:

The main reason I left Google is that they can no longer innovate. They’ve pretty much lost that ability. I believe there are several contributing factors, of which I’ll list four here.

Second, they are mired in politics, which is sort of inevitable with a large enough organization

Third, Google is arrogant. It has taken me years to understand that a company full of humble individuals can still be an arrogant company. Google has the arrogance of the “we”, not the “I”.

But fourth, last, and probably worst of all, Google has become 100% competitor-focused rather than customer focused.

Time survey on how people stay passionate at work reveals that the secret is to align what you love with what you do to earn money with the added observation that helping others is a powerful motivator:

passion and purpose strongly predict how much effort people put in for each hour they’re on the job, rather than the sheer number of hours they work. That intensity leads in turn to higher performance. If you love what you do, you’ll show up with a certain amount of vigor. And if you also feel that you’re helping other people—that they need you and depend on your contributions—your motivation to excel becomes that much greater. You’re targeting your efforts toward making contributions to your purpose. You activate positive emotions such as joy, excitement, pride, inspiration, and hope, all of which gives you more energy. And that lets you do everything better on the job.

Why Scrum vs. Kanban as development methodologies is a false dichotomy.   But does it matter anyway?  Life hacks like what development methodology to use to improve your productivity are part of a 200 year movement to destroy your humanity.  Resist it.  Better to “experience the stillness, to apprehend the lineaments of reality“:

The Guardian provide a comment platform to a pro-European who savages Theresa May’s ‘dishonest’ Brexit no-plan.  One of the specific boasts about life outside of the EU was that we would be able to secure more generous trade terms with enthusiastic supporters like the US under Trump.  As Bloomberg highlighted, that doesn’t seem quite so straightforward any more given:

The transatlantic ties are critical to May’s administration, while just convenient for Trump. The U.K. needs to forge new trade partnerships after leaving the European Union. The U.S. wants to reconfigure some of its relationships to protect American companies.

As if that weren’t hard enough, with Trump there’s a whole separate aspect of special needs to the ‘special relationship’:

During formal phone calls between the two leaders, May finds it almost impossible to make headway and get her points across, one person familiar with the matter said. Trump totally dominates the discussion, leaving the prime minister with five or ten seconds to speak before he interrupts and launches into another monologue.

In one phone conversation during 2017, Trump complained to May over the criticism he’d been getting in British newspapers. Amid warnings that Trump would face protests in the streets when he arrived, he told the prime minister he would not be coming to the U.K. until she could promise him a warm welcome.

Trump may think he knows a lot but he clearly knows nothing about British irreverence for authority that even a superficial perusal of The Fall’s output would demonstrate in spades.  He isn’t in any position to hold anyone to promises anything given his own unreliability and unpredictability.  The Guardian highlight how under his watch the Doomsday clock has moved forward to just two minutes to midnight following an abject failure since he became US President to do anything about the most serious problems facing the planet: 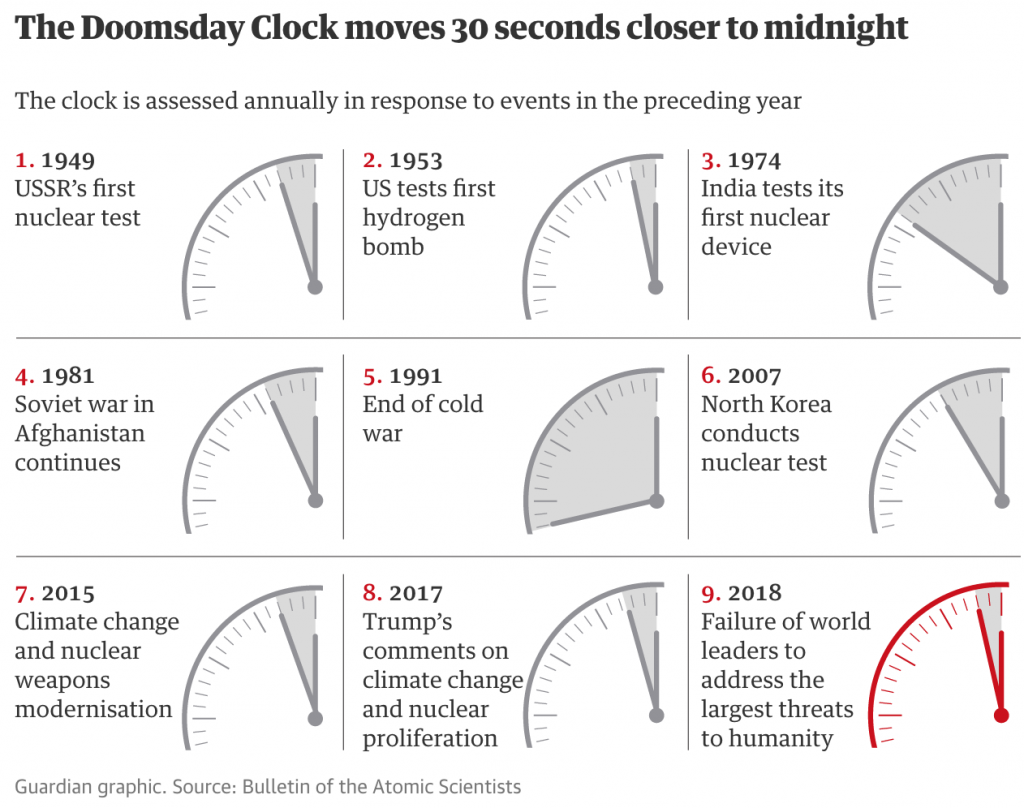 This Quartz post explains why his “America First” policy on solar panels not only damages the planet but is also likely to damage US innovation and thus benefit China for whom the sun really is rising under Trump.