Tim Harford explains in this excellent blog post how the history of the tobacco industry illustrates why facts alone are not enough to convince people of scientific truth.  The big tobacco PR machine ran rings around the irrefutable data indicating smoking causes cancer for over 50 years since the link was first established.  The methods they used have been adopted almost wholesale by the new populists including trivialisation, distraction and redirection. The goal is to, the creation of a confusing hall of mirrors obscuring true knowledge, to sow uncertainty and doubt and keep the masses as ignorant of the truth as possible.  Once achieved, no amount of facts alone can dispel the fog.  The strategy is very much in evidence in the chaotic frenzy of seemingly unrelated initiatives Donald Trump announces daily via Twitter.  The field of how ignorance is deliberately produced is called agnotology and it has never been more important to be aware of it than today as we are assaulted by fake news:

The cultivation of natural curiosity is the only real weapon those who cherish truth can employ. Along with someone who instinctively embodies it and uses it to communicate scientific reality to the masses:

What we need is a Carl Sagan or David Attenborough of social science — somebody who can create a sense of wonder and fascination not just at the structure of the solar system or struggles of life in a tropical rainforest, but at the workings of our own civilisation: health, migration, finance, education and diplomacy.

Only by being curious about the past and asking questions can one look past the nonsense that is being projected as policy in today’s political landscape. Consider the revisionism fuelling the neocolonialist post-Brexit Empire 2.0 fantasists:

May’s global Britain is not an open-armed nation going out into the world. In her vision, incubated by an amnesiac view of history, the empire itself was an act of beneficence, and the outrages perpetrated in its name never happened.

Aeon’s review of the groundbreaking work of 20th century French philosopher Michel Foucault is timely and very relevant to this discussion. His theory of power revolved around two hidden manifestations, the disciplinary power of surveillance as incarnated in the notorious Panopticon prison design, and biopower as evidenced by gender and racial supremacists.  Key to his worldview was the dangerous normalising effect that the application of such power could have on those it was applied to.  Foucault’s work remains arguably more relevant than ever in a world where the technology-enabled atomisation of society is helping to drive us backwards into a new golden age of ignorance.

The Bank of England are trialling the application of blockchain and AI technologies to spot abnormalities in financial transactions and track cross-border payments.

MIT Technology Review on how DeepMind’s use of ‘neural episodic control’ to help AI systems learn faster is inspired by how the hippocampus works.

Bloomberg on a video AI startup called Matroid that look well-placed to take advantage of the surge in video creation:

With the explosion of video from YouTube to police bodycams, Matroid is seeking to fill the need for rapid scanning of massive volumes of moving images.

Modularity as a stepping stone to microservices.

Good Economist piece on how Microsoft has undergone a corporate digital transformation of Microsoft under Satya Nadella’s 3-year tenure.  The figures speak for themselves: 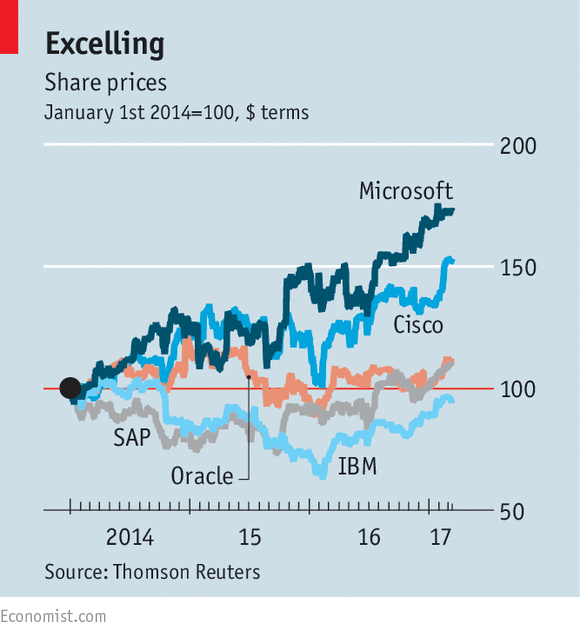 Variety present a day behind the scenes look at Netflix and their global TV network ambitions.

Stockholm is one of the fastest growing hubs for private startups in Europe.  The Swedish capital has produced the most billion-dollar companies per head of population than anywhere else outside of Silicon Valley.

Benedict Evans in a highly thought-provoking post encourages us to consider the second-order impacts that driverless cars will have on broader society from congestion to smart cities.  Here’s a representative sample:

There are something over 230,000 taxi and private car drivers in the USA and around 1.5m long-haul truck-drivers. The question of what happens to taxi and on-demand drivers has been discussed too widely and publicly for me to add anything here, but long-haul truck drivers have some interesting nuances (I’m here excluding local delivery drivers as they’re often needed for more than driving the truck itself and robotics is a whole other conversation). The average age of a long-haul driver is now 49, and around 90 thousand leave the industry every year, half though retirement. The industry thinks it has a shortage of around 50,000 drivers, and growing – people are leaving faster than they can be replaced. Truck driving can be an unhealthy, uncomfortable job with a difficult lifestyle. Hence, on these numbers, over half the current driver base will have left in ten years, around the time that most people think full, level 5 autonomy might be working.

Python for big data in one very big picture: 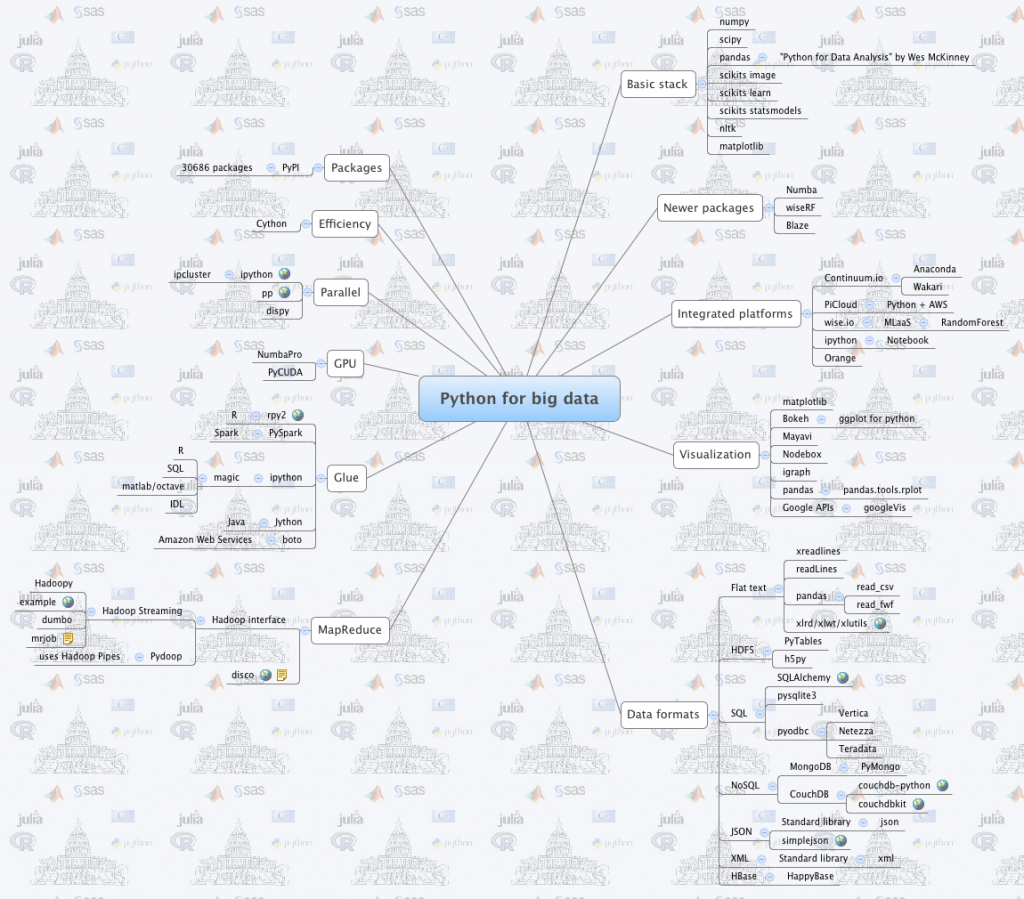 Google’s Python Fire module sounds very interesting if like me you’re an advocate of the command line.  It sounds like it might be a a good adjunct to docopt:

Fire uses inspection to turn Python objects into a CLI that offers tab completion and documentation. Fire can be run on any object, including functions, classes, and modules. The tool can help debugging or exploring Python code and turning existing code into a CLI, and developers will find it easier to use a REPL via Fire. CLIs built with Fire come with an interactive mode.

Elder care is a growing issue for all societies.  This Guardian article paints a grim picture of the tribulations that face over-85’s exhorting readers to prepare in advance :

make a will, make a living will, put in place power of attorney, have a pension, avoid being overweight, don’t smoke, drink moderately, stay active, think about your needs in old age before you get there and, if necessary, downsize and move to somewhere more suitable, don’t stick your head in the sand about old age, have a social network, stay mentally active, keep out of hospital if you can (a geriatrician told me that 10 days in hospital is equivalent to 10 years of muscle wasting in elderly people), work for as long as you can, and find what you enjoy and do it. That is as much as we have control over.