The certainty of chance

Men must endure
Their going hence even as their coming hither.
Ripeness is all. Come on.
King Lear, Act 5, Scene 2

Humanity has made great progress in the last 200 years.  The sheer extent of improvement in the basic human condition is laid out in compelling fashion in this recent post from ourworldindata.org which asked the legitimate question, “why do we not know this?“: 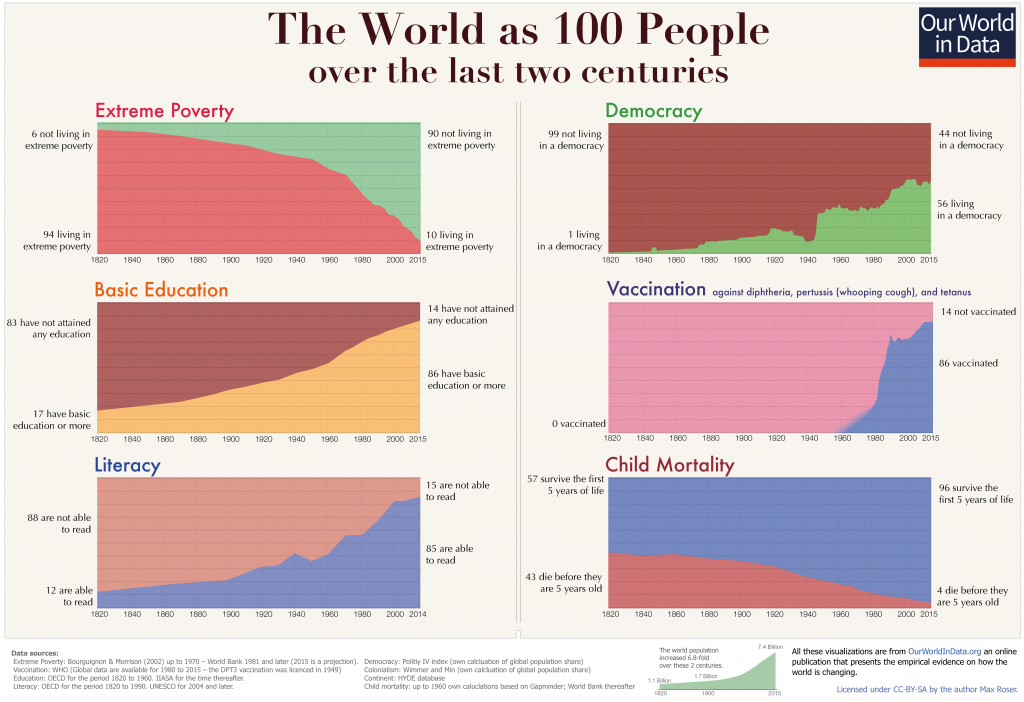 It’s a message that will be familiar to readers of positivist thinkers on the human condition such as Steven Pinker who presented a similarly upbeat (and controversial) take on the decline in violence in society since the Enlightenment:

Just because things are getting better doesn’t mean they always will. The fallacy of reasoning from induction is something Nicholas Nassim Taleb explores memorably in the Black Swan with the parable of the Thanksgiving turkey: In fact, what the charts show is that the era of globalization is just beginning and the next phase will disrupt human workers across the service sector with far more profound impact than the hollowing out of manufacturing in the last 35 years.  People may have voted to ‘take back control’ over immigration but it is technological unemployment driven by globalization they should fear and it’s going to be far harder to close the front door on that:

Technology will bring globalization to the people-centric service sector, upending far more jobs in rich countries than the decline in manufacturing has in recent decades.  …  The disruption won’t come because people will move more freely across borders, but because technologies will provide “a substitute for being there,”

The introduction of unpredictability into the Age of Anger mix in the shape of the new leader of the free world should give further pause for thought.  The US, a nation that has inherited a collection of nuclear weapons to destroy the world several times, will shortly be run by a man with seemingly no moral compunction over their use, a notoriously thin skin and apparently no coherent position over whether or not they should be used.  Let’s hope 2017 doesn’t see black swans of the nuclear variety.

Trump will also inherit the full capacity of the online surveillance systems built by his predecessors.  It’s equally unpredictable what he will do with this apparatus but remains entirely plausible he may use it to clamp down on critics identified by their online activity.  A natural instinct towards protectionist attitudes may extend to the digital domain once he has hands on the levers of power.   All the more reason to heed a “less is more” approach to online activity in 2017 though perhaps few will go to the extreme of Mark Boyle in building a log cabin and eschewing all things online like a digital era Thoreau in New Walden:

[Technology] destroys our relationship with the natural world. It first separates us from nature, while simultaneously converting life into the cash that oils consumerist society. Not only does it enable us to destroy habitat efficiently, over time this separation has led us to valuing the natural world less, meaning we protect and care for it less. By way of this vicious technological cycle, we are consciously causing the sixth mass extinction of species.

And finally, uncertainty hangs over a question many in the US tech industry are asking in relation to the next four years.  Namely, whether China will be able to benefit in business terms from the disruption that Trump represents to US business interests not least in terms of immigration clampdown.

CNet on why we can expect AI to go mainstream in the Enterprise next year with new adopters across the spectrum including banks, retailers and pharmaceutical companies.  Gartner’s Tech Predictions 2017 also include AI everywhere along with blockchain, digital twins, chatbots, mesh architecture and adaptive security architecture.

Meanwhile Mark Zuckerberg has been “building Jarvis” and in a must-read Facebook post, shares his thoughts on the, at least partially successful, experience.  Unsurprisingly he’s bullish about the prospects of text vs. voice interfaces as it plays to Facebook’s Messenger service:

No wonder everybody is in a rush to acquire deep learning skills as quickly as possible.  And launch mysterious new stealth propositions with underground events at places like the annual NIPS (Neural Information Processing Systems) conference.  As RocketAI did with their mysterious ‘new’ technique called Temporally Recurrent Optimal Learning (or TROL).  The story of what happens when you leverage hyperbole to the max is a cautionary tale told by a combination of The Day Today and Black Mirror.  The problem in this case is that nobody really knows anything:

Clever teams are exploiting the obscurity and cachet to raise more money, knowing that investors and the press have little understanding of how machine learning works in practice.

This must-read list of top 10 Python libraries of 2016 includes web framework Sanic, AWS management library boto3, visualisation framework bokeh, ‘datetime for humans’ proposition arrow and the inevitable TensorFlow.  The list clearly highlights the importance of being on Python 3.5++ moving forward – several of the choices only work on that platform.

How syntactic sugar improves the taste of Python 3.6:

The Wynn Las Vegas is going to install an Amazon Echo in “all 4,748 hotel rooms” raising all sorts of security questions like for instance:

Will the hotel automatically wipe the device’s history once a guest has checked out? Or at least before the next guest arrives in the room! Can perhaps every guest have access to their own history of commands, so that they can delete it themselves just before check-out?

AskTheFridge is a promising new site that may offer insights into this and other tech subjects through 2017.

Mobile is eating the world.  But will AI eat mobile?  Ben Evans considers the state of mobile at the end of 2016 which his usual panoply of compelling insights:

The Fall of Nokia is a few years old now but remains an interesting resource.  Even if Nokia had somehow survived the smartphone wars, one suspects they would have fallen by the wayside in the era of AI as may Apple:

The biggest threat to innovation is organisational culture.  A lesson Nokia and other ‘losers’ can repent upon at leisure:

Ageism in Silicon Valley is “on the rise but it’s hard to prove“. Something that mildly chimes with personal experience.  What is on the rise is an increasing clash of ages and therefore generational culture in the workplace.  It’s important to keep an open mind on that as you get older:

“You just have to keep going. There’s no good advice for being an older applicant.”