A change is as good as a rest

Mark I then, fellow-mortals around,
All ye who would wish to be blest,
Much wisdom in this simple phrase may be found –
A change is as good as a rest.

Developments in 2016 appear to reveal that although we are more connected than ever and theoretically exposed to a greater plurality of opinion, that does not appear to have happened in practice. Instead the Internet has allowed a small number of socially authoritative voices and media outlets to broadcast their views to receptive audiences that want to tune in to a specific political frequency:

The internet is turning out to be a disaster for information diversity, contrary to widespread opinion among the technorati. The more seductive ideas crowd out niche opinions. The danger is that it’s now possible for the government to regulate actual speech. 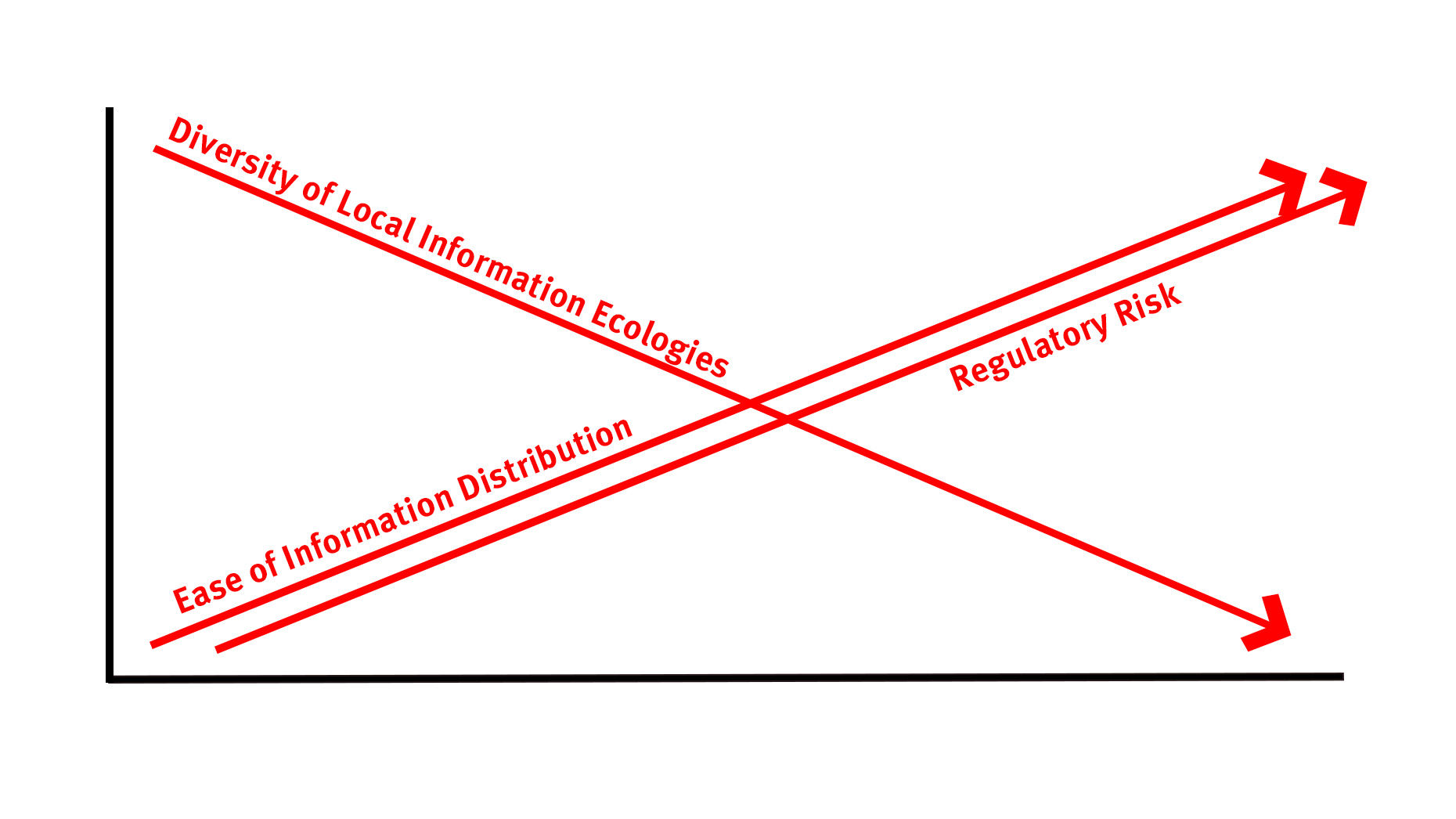 The result has been a growing rigidity of thought amongst opposing perspectives both left and right that rejects doubts and alternatives. People choose to hear what they want to hear in a mass exercise in confirmation bias supported by technology and media.  The US election proved something of a watershed in this respect:

Without built-in protective functions like critical analysis, self-reflection, openness to counter-evidence, willingness to re-evaluate any and all beliefs, etc., bad information in a closed-off system ends up doing massive damage in short period of time. What has happened to too many fundamentalist belief systems is damaging information has been allowed in from people who have been granted “expert status.” If someone is allowed into a closed-off system and their information is deemed acceptable, anything they say will readily be accepted and become gospel.

Trump and his team adroitly exploited this dynamic to convince enough voters to vote for a change that some observers predicted would occur years ago but many liberals simply could not conceive happening.  Now he and his administration face the reality of power, one suspects things will be very different.  Already it looks like confusion and contradiction rather than clarity will be the order of the day, a sort of American version of Russian maskirovka befitting of an admirer of Putin.  Trump’s presidency may yet reverse decades of social progress in the US and robust vigilance will be essential if one takes his authoritarian words at literal face value which we must.  Mass revisionism of the past is a particular concern as Orwell noted in the aftermath of the Spanish Civil War:

The implied objective of [totalitarianism] is a nightmare world in which the Leader, or some ruling clique, controls not only the future but the past. If the Leader says of such and such an event, ‘It never happened’ – well, it never happened. If he says that two and two are five – well, two and two are five. This prospect frightens me much more than bombs – and after our experiences of the last few years that is not a frivolous statement.

It is important to recognise that no one person, not even the US President, can control the entire global agenda.  If we want to see a better world, individuals and groups have to examine what they, not just their government, can do to help build it by reaching out across national boundaries.   Now Trump has been elected, the media need to focus less on the man and more on the specific actions of his administration.  Arguing from reason will be hard as with any attempt to cut across a new orthodoxy.  Persistence, persuasiveness and preparation will be needed.  The US, in keeping with the rest of the world, faces massive problems and the new regime will struggle to find convincing solutions in part because the economics of populism just doesn’t add up.  Four key areas that require careful scrutiny moving forward are:

Amid the gloom, some right spots of inspiration remain.  This ad originated in the US too:

On a personal front, I’m shortly taking up a new role which will reduce the amount of time I have available to devote to writing.  I hope to still blog but it will have to be in shorter form and perhaps less frequently and spend even less time than I do on social media.  A change is as good as a rest.

Gartner’s latest hype cycle has Machine Learning at its peak of inflated expectations: 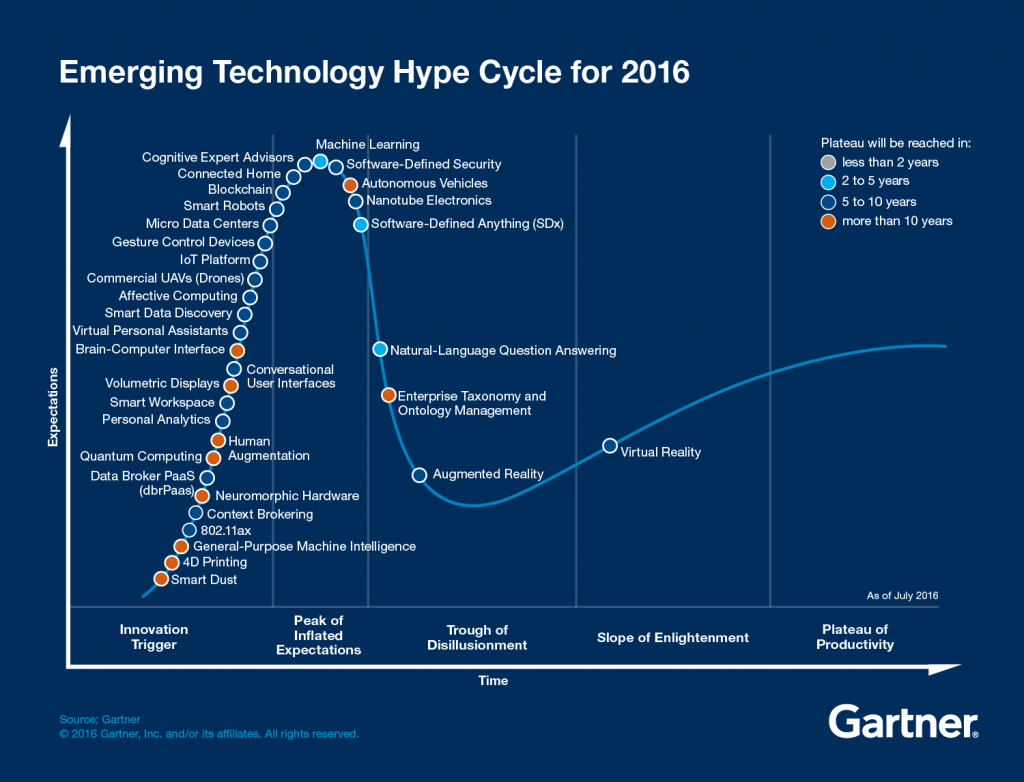 It’s an assessment that may confirm the suspicions of AI skeptics but the last couple of years clearly point to Machine Intelligence as a foundational technology for the future which isn’t going away.  This O’Reilly article reviewing the current state of machine intelligence showcases the significant advances have been made in terms of the technology proposition landscape over this period and what it means for businesses everywhere in the coming years:

For the first time, a “one stop shop” of the machine intelligence stack is coming into view—even if it’s a year or two off from being neatly formalized.

HBR explore the economics of machine intelligence and why the technique will ultimately be applied everywhere to lower the cost of prediction.   Perhaps counterintuitively, the value of human judgement will increase as the use of machine intelligence for raw data gathering becomes more prevalent.  It’s a theme that is expanded upon in this Verge post suggesting AI and humanity will be “inseparable” in their dependence upon each other.  Maybe so at first, but in the long term, it seems inevitable that machine intelligence systems will evolve through active unsupervised learning approaches built on current starting points to disrupt human judgement too as they approach human level (HLMI).

The Black Mirror episode Be Right Back brilliantly imagined a future in which the dead could be resurrected by creating a chatbot built on their social media interactions.

In fiction, the result of this curation proves compelling at first, all the positives with none of the difficulties – even better than the real thing.  No wonder the urge to divulge information to a chatbot as if it were a confidante is overwhelming.  There are major privacy risks in doing so:

“Think of all the data you send to the bot. It is super easy to create character studies based on the text you send to a program.”

Already today, some of these systems know much more about you than others and with advances in textual machine learning and growing historical archives to analyse, we are heading into unknown territory:

The promise and potential that machine intelligence represents is driving a massive industry-wide compound push with Wired suggesting the companies in the vanguard are “remaking themselves around AI”:

“artificial intelligence is all the buzz in the tech industry right now, which can make it feel like a passing fad. But inside Google and Microsoft and Amazon, it’s certainly not. And these companies are intent on pushing it across the rest of the tech world too.”

and draining the market of highly sought after and difficult to replace tech talent in doing so:

“Building this machine learning technology is quite different from standard software engineering. It’s less about coding and more about coaxing results from vast pools of data.”

The rush to land grab talent may prove harder to maintain in the US, however, if the incoming Trump government decides to make the terrain difficult for foreign workers.  Yann LeCun, head of AI at Facebook, recently hinted as such:

Facebook themselves have ‘hidden’ a lightweight AI within their mobile app.  It is used to apply artistic filter effects to your pictures in close to real time: 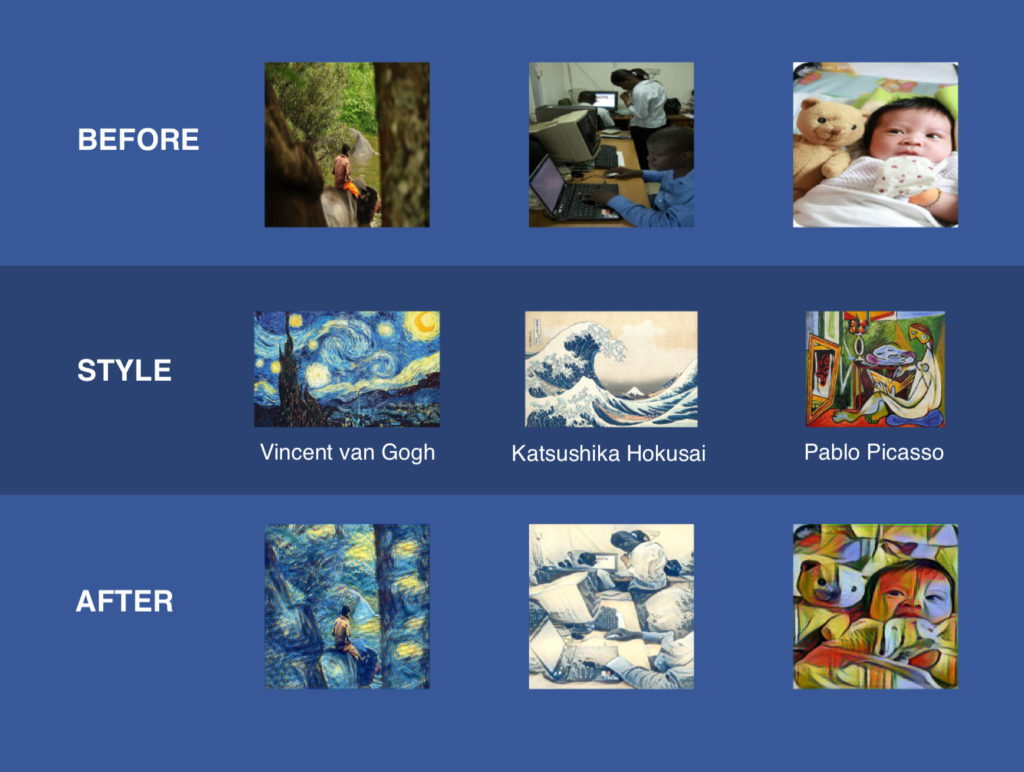 Interestingly, the model appears to be created and housed entirely client side:

“Facebook intends to offer the framework on both iOS and Android devices, intent on building all sorts of AI models that can operate without a tether to the data center.”

Google on the other hand are making Neural Machine Translation framework available to commercial developers as a backend Google Cloud Platform API.  Their big developer proposition is the Tensorflow framework though.

The hardware commodity line is moving up with the pendulum swinging back to specialist hardware designed to support specific applications in mobile devices such as machine learning.  As it does so System-on-Chip (SoC) solutions are displacing CPUs disrupting the semiconductor industry in the process.  Qualcomm, NVidia and Apple are the companies that arguably most stand to gain from this shift though Mediatek and of course Intel cannot be discounted:

Form-factor, cost and power-per-function are now critical drivers in the mobile market and that in turn has increased the importance of on-chip integration of functional hardware (e.g. power management, computing, audio/video, graphics, GPS and radio)

Huawei is the most profitable Android smartphone OEM closely followed by Oppo and Vivo highlighted a couple of weeks ago as having leapfrogged Xiaomi:

Huawei’s next trick will be to create the AI-powered “Superphone”.

The Mous Limitless is one amazing case capable of protecting an iPhone6 from a 45ft drop:

The peerless Simon Wardley on why serverless is destined to be the next infrastructure megatrend. Anyone who saw cloud coming should be familiar with the playbook by now:

serverless is roughly where Infrastructure as a Service (e.g. cloud) was in late 2007. Look around you and how much everything now is “cloud, cloud, cloud” and how difficult it is to hire people with the right skills.   Think back to 2007 and how much it was all “this is a toy”, “no serious enterprise would use this” and “our data centre is better”. Think about all those big name strategy consultants who told you that it wasn’t for the enterprise.   If you currently have regrets about not moving fast enough back then, just know you’re about to make the same mistake again. 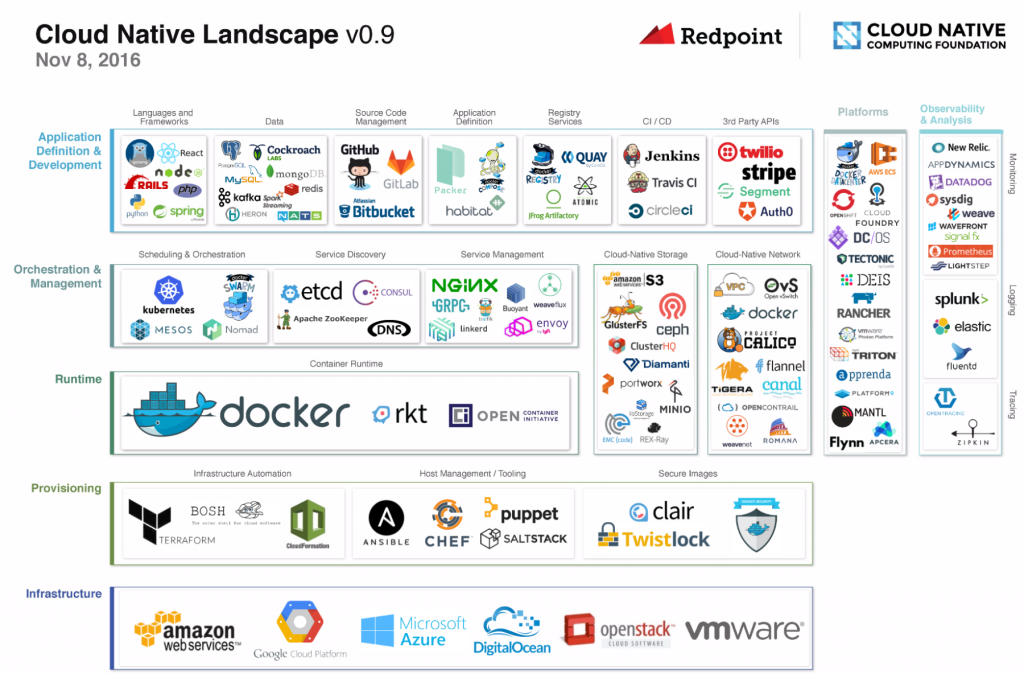 How not to do email marketing – AWS CTO Werner Vogels responds perfectly:

Dear John, I know your targeting algorithm was cheap and thus not perfect, but I suggest to ask your money back from however sold it to you! pic.twitter.com/IYkiIqeAhM

Dropbox moved away from AWS to their own cloud solution called Magic Pocket.  This InfoQ podcast provides some more interesting insights into what was involved and how Dropbox works under the hood:

Three languages are used for the backend infrastructure. Python is used mainly for business logic, Go is the primary language used for heavy infrastructure services, and in some cases, for example where more direct control over memory is needed, Rust is also used.

Dropbox invest very heavily in verification and automation. A verifier scans every byte on disk and checks that it matches the checksum in the index. Verification is also used to check that each box has the block keys it should have.

This page hosts an excellent collection of resources on learning ReactJS including a course on ES6 fundamentals which is mostly in the form of short videos presented by an engaging Spotify developer.   Here’s the first one:

Here’s a code sample from later on in the series which illustrates arrow notation for functions, filter, iteration and recursion.  To follow along you need to set up a local node.js environment, copy your code into a suitable .js file and then invoke “node <file>.js”:

JavaScript is populist – anyone can have a go at writing and then iterating their own library.   However, the downside of that is that it remains surprisingly tricky to set up a definitive development environment.  This page offers a very useful starting point.

The universe could be one giant alien.  This audacious theory would in one stroke explain the Fermi Paradox as well as Dark Matter and Dark Energy according to the author and skirts rather close to traditional religious ideas:

Perhaps hyper-advanced life isn’t just external. Perhaps it’s already all around. It is embedded in what we perceive to be physics itself, from the root behavior of particles and fields to the phenomena of complexity and emergence.  In other words, life might not just be in the equations. It might be the equations. 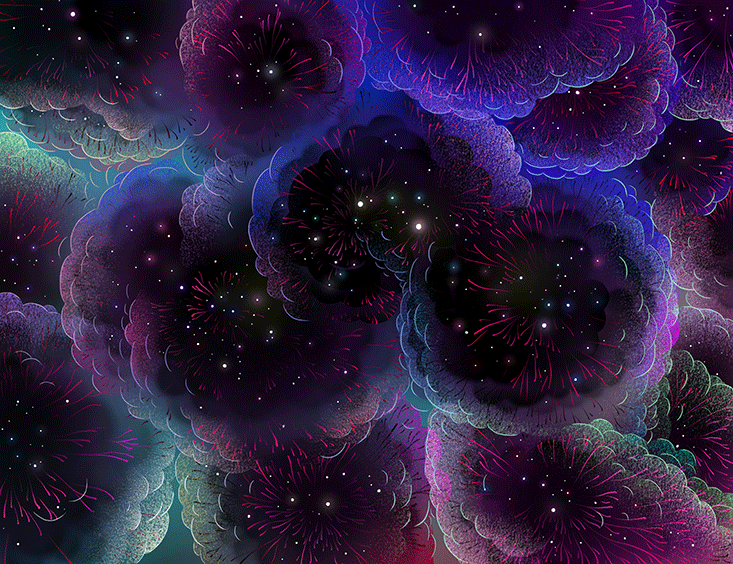