Jaron Lanier gave a TED talk entitled Remaking the Internet post-Cambridge Analytica in which he outlined where Facebook and others went wrong.  Lanier’s basic thesis is that social media companies ad-based business model is ruining society.  Their propositions are fanning outrage and group threat amongst users unable to channel the mindfulness, self-restraint and inner Buddhist that many of the execs in these companies seem increasingly to be invoking when it comes to getting high off their own supply.  Lanier’s suggestion is that we focus less on utopianism and more on making things better than they are today.  In other words on the protopianism introduced last week:

This remarkably narrow-minded take on the value and joy of coding for fun was published by Wired of all magazines.  The sheer joy of coding as a way of being creative with technology stands alone as a valid activity for self-growth even if you don’t for some reason subscribe to the view that it’s really important to have an understanding of how code works to navigate modern technology.  There’s no need for those that want to pursue that path to have to justify themselves or their proclivities.  One imagines the same author would never dream to criticize those doing sudoku or crossword puzzles on the daily commute for ‘wasting their time’.

Evidence that the idea that the popular view that we have different so called VARK (which stands for “Visual, Auditory, Reading, and Kinesthetic”) based learning styles is a myth.

Impact investment whereby VCs are looking to invest in businesses that are committed to major personal or social change is a growing phenomenon and has the power to change society for the better.

Amazon have decided to close TenMarks, their online maths and writing service in 2019 in something of a surprise.  It’s still listed as one of the key pillars of Amazon Education.

News that Amazon is considering integrating Amazon Key, their smart home platform with newly-acquired smart doorbell proposition Ring is no surprise.  They seem to be hedging their bets more widely across this nascent ‘smart home delivery’ space and it’ll be interesting to see how it develops over the coming year or two:

With Amazon in December buying Blink, another maker of smart doorbells and security cameras, the company now has three separate brands for security cameras and two for doorbells. Amazon said Thursday Ring, Blink, and Amazon Cloud Cam will continue to operate under those brand names, and service for customers will continue as before.

Alexa meanwhile has garnered more unwelcome media scrutiny over a recent patent seemingly positioning it as an all-purpose “proactive” listening device in your house. 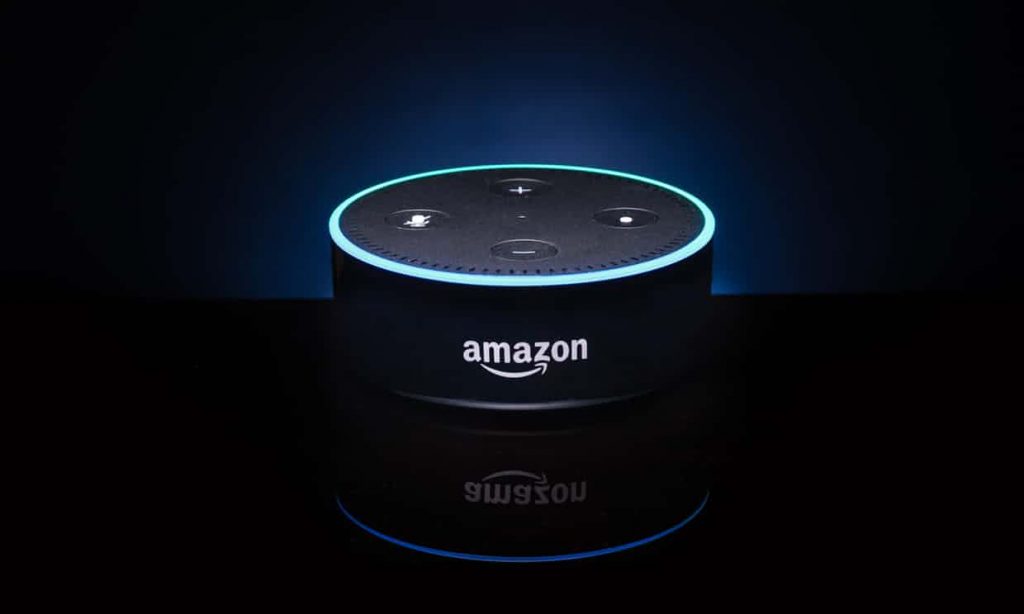 Everything returns.  Memories of Vertu phones of old in the news of the flip-phone revival:

Thanks to widespread 1990s nostalgia, and the ever-present dread of knowing how tech companies hold all the data of our lives, the obsolescence of the flip phone has turned into a sort of modern day security blanket. With all of the coverage these old timey gadgets have gotten so far this year, it seems like everyone with even a slight dislike of technology is thinking about it.

Benedict Evans on the premature death of the newsfeed, victim in the Facebook case of algorithmic feed exhaustion on the part of users.  Users may find themselves encountering deja vu when the next thing they jump to becomes tomorrow’s Facebook:

The ever-excellent CBInsights present The Factory of the Future.  Almost every hyped technology of the present is in here.  Let’s blockchain all the Things: 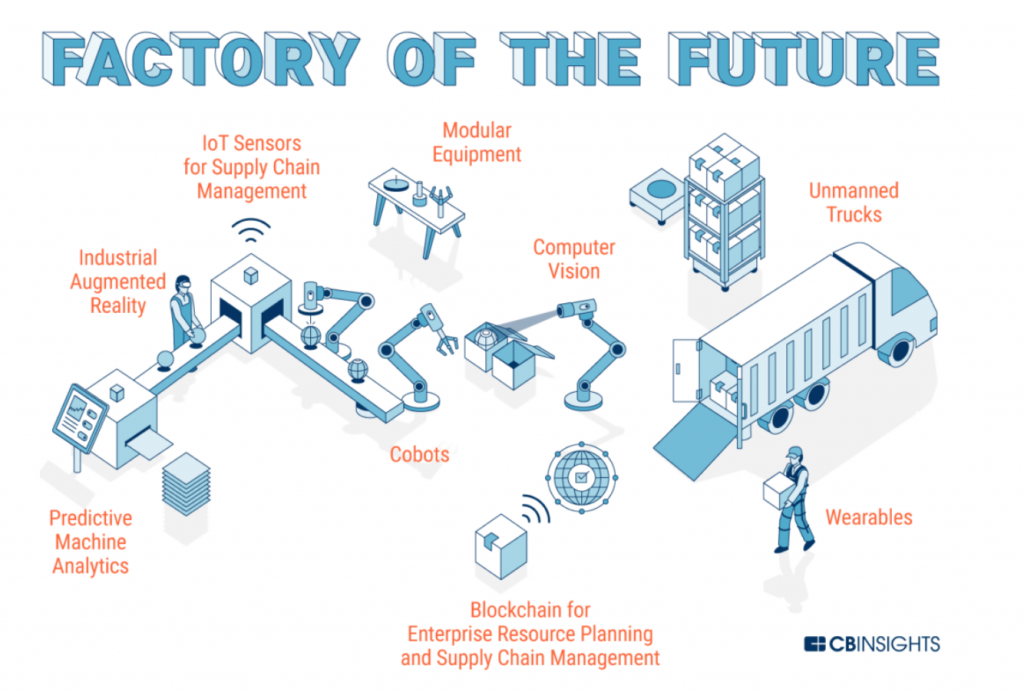 A first programming language can be brought into existence by implementing it in machine language, coding every byte manually, and burning it into an Eprom (or other programmable memory device).

So much of the content of a modern scientific paper is computation, it makes more sense for the submission to be an interactive mathematical notebook.  Enter Jupyter.  This remarkable article in the in The Atlantic outlines how we are in the midst of a revolution in scientific communication moving away from the static white paper form to something much more dynamic.  Echoes of Eric Raymond’s The Cathedral and the Bazaar in how it has remorselessly assaulted Mathematica: 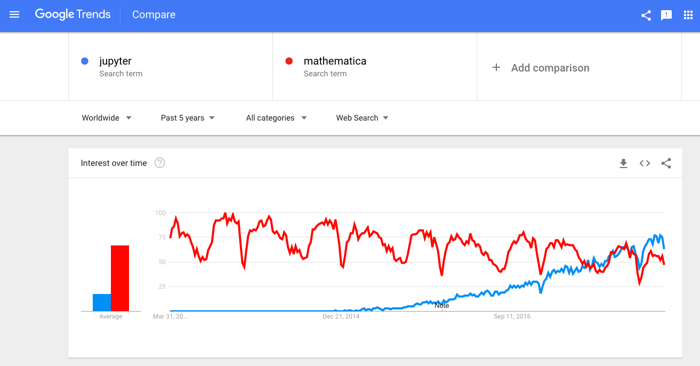 Everyone starts off unconvinced by what seem like risky and untested options and following the narrow path beyond close confines takes real gumption and intuitive effort.  Tim Cook was no exception when weighing up between Apple and Compaq twenty years ago:

“Any purely rational consideration of cost and benefits lined up in Compaq’s favor, and the people who knew me best advised me to stay at Compaq,” Cook said in a 2010 commencement speech that he delivered at his alma mater, Auburn University, a year before taking over as Apple CEO.

“One CEO I consulted felt so strongly about it he told me I would be a fool to leave Compaq for Apple.”

Cook did it anyway. Taking the job “didn’t make sense. And yet, my gut said, go for it. And I listened to my gut.”

How you should prioritise work and life.  Stop getting sidetracked and distracted by the shrill and constant screech of what is supposedly urgent which very often isn’t:

“Most leaders start well, but eventually just react to what others want.  We focus on getting through the week instead of planning ahead and reaching a goal.”

Giving better feedback involves using the right criteria, taking time to vet your criticisms and praising as well as criticizing.

Quora reveals how you can become a senior staff engineer or principal engineer in a big tech company.

Atlassian’s CEO Archana Rao on how to get more women into engineering leadership positions.  It starts with giving them the chance much earlier on:

We need more women in engineering leadership. We know that diverse teams produce better outcomes. Let’s commit to encouraging girls to pursue STEM education, considering women for both front-end and back-end programming roles, and pushing the women on our teams to stand up and say, “I can do this job!”

TechCrunch on how successful founders are often far older than popular myth and and Silicon Valley legend.   Agism is implicated:

The reason why older founders are ignored by the ecosystem is the same reason why women and other minorities struggle in the Valley: It’s really not about what you build, but what you look like while building it.

Bloomberg on the curious case of robots and the missing productivity gap in US manufacturing.  As the use of industrial robots has increased, productivity hasn’t kept pace: 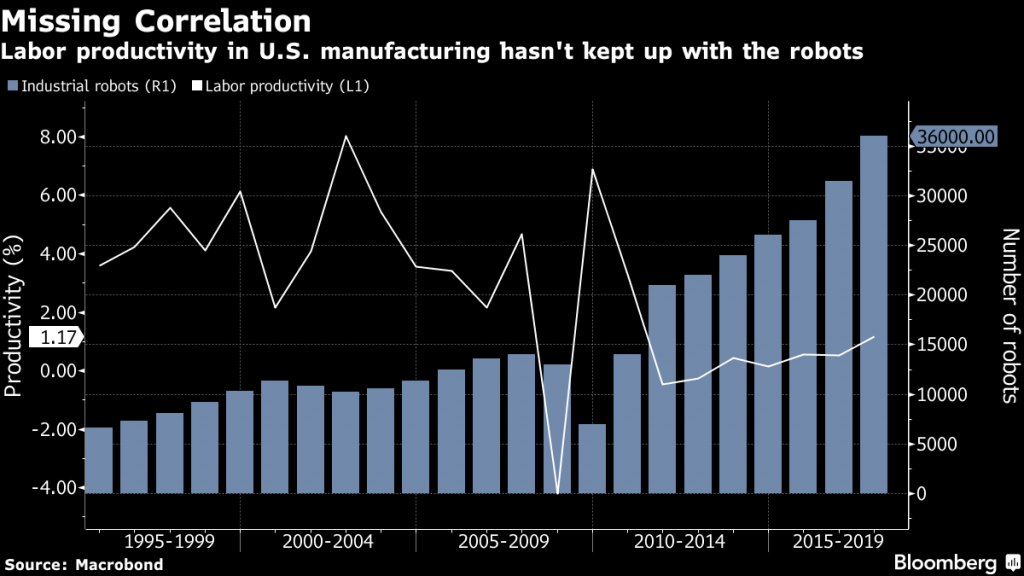 In a development that could turn out to be revolutionary and offer humanity a way out of our plastic apocalypse, scientists have improved upon an enzyme first found in bacterium that had naturally evolved to eat plastic at a waste dump in Japan in 2016:

The mutant enzyme takes a few days to start breaking down the plastic – far faster than the centuries it takes in the oceans. But the researchers are optimistic this can be speeded up even further and become a viable large-scale process.

The Atlantic entertain the haunting question whether we are the earth’s only advanced civilization or whether there were others millions of years ago that left no trace in what is termed the Silurian Hypothesis.  It turns out that simply asking the question opens up all sorts of tantalising possibilities of interpreting the geological data we have going back to the Paleocene era.  There’s a sobering link to the plastic that will outlive us:

Wind, sun, and waves grind down large-scale plastic artifacts, leaving the seas full of microscopic plastic particles that will eventually rain down on the ocean floor, creating a layer that could persist for geological timescales.

2001 also haunts the collective dream-space of many.  The Guardian consider the film’s legacy 50 years on and come up with a tldr of epic proportions:

According to [Stanley Kubrick and Arthur C. Clarke], simple cavemen would encounter intelligent aliens who would help them acquire brainpower and so set humanity on the path to the planets. Once space travel had been achieved, humanity would make further contact with these aliens, who would then help us – after we had survived the murderous attentions of a supercomputer – to turn ourselves into a species with superhuman powers. 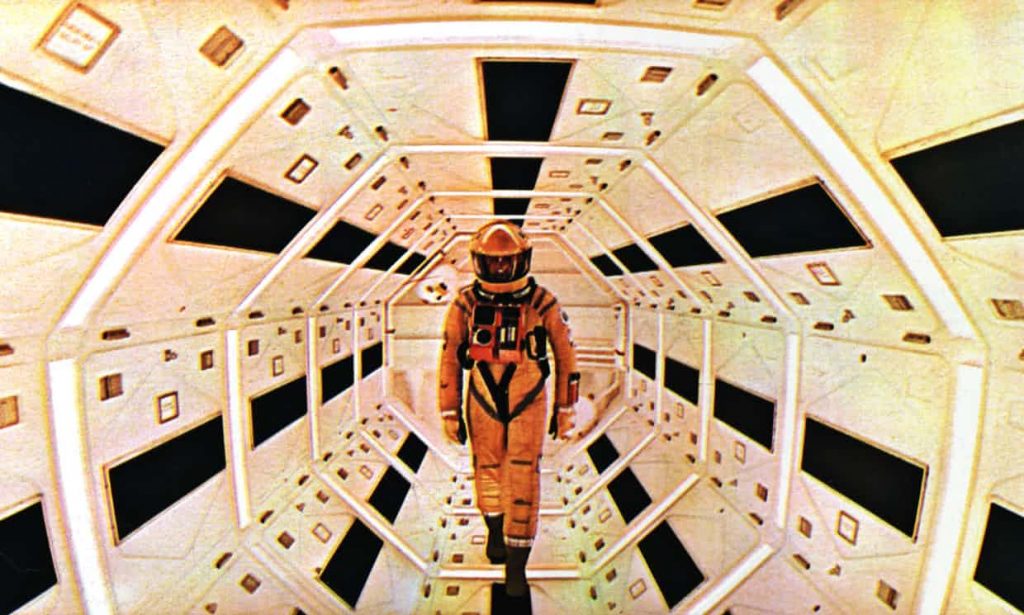 Our society has become so specialised that “it is easier to create something complicated than simple“.  We should bear this in mind and make constant conscious efforts to simplify, simplify:

we are now, fundamentally, a gestalt intelligence. We are like ants and bees – none of us can possibly know everything about society, but as a swarm we have enough specialised workers to allow our tribe to flourish.

Why Donald Trump is a “dead man walking” following the revelation that federal prosecutors in the Southern District of New York are investigating his personal lawyer Michael Cohen.  Apparently Trump is more worried about this than Robert Mueller’s Russian probe and is right to be because he won’t be able to stop it from running through the course of the remainder of his presidency:

there’s essentially nothing Trump can do about it. He can’t fire the career civil servant prosecutors who are now on the job. And practically, he can’t order the Southern District to stop investigating him, because such an order would likely be construed by the prosecutors there as a criminal obstruction of justice.