The Guardian published an important piece on how Silicon Valley operates a ruthless code of secrecy using a combination of tools to suppress leaks:

The public image of Silicon Valley’s tech giants is all colourful bicycles, ping-pong tables, beanbags and free food, but behind the cartoonish facade is a ruthless code of secrecy. They rely on a combination of Kool-Aid, digital and physical surveillance, legal threats and restricted stock units to prevent and detect intellectual property theft and other criminal activity. However, those same tools are also used to catch employees and contractors who talk publicly, even if it’s about their working conditions, misconduct or cultural challenges within the company.

All the more reason after the recent PR disasters that have befallen Facebook as a result of leaks.  However, putting out full page ads apologising to users for the misuse of their data smacks of locking the smart door after the horse has bolted.  It also fails to convince given Zuckerberg is on record having said the company would not sell private data to advertisers, something they patently did do:

Please help this 2009 interview of Facebook's CEO get seen by people who don't use Twitter. Here's a download link so you can pull and repost it: https://t.co/c32DmpVIig pic.twitter.com/quERsO5WZi

Many contrasted it to a famous speech by Steve Jobs on Apple’s view on privacy:

As this disturbing Guardian article highlights, both Facebook and Google have plenty of data on you depending on how many years you have.  You willingly gave it to them:

This is one of the craziest things about the modern age. We would never let the government or a corporation put cameras/microphones in our homes or location trackers on us. But we just went ahead and did it ourselves because – to hell with it! – I want to watch cute dog videos.

The Facebook Cambridge Analytica scandal is in many ways the A-bomb moment for computer science.  The point in time when we transitioned from innocence into the software Anthropocene.  Computing and those that work in it now face a growing ethics crisis.  It may be most potently manifest in the shrill campaign to Delete Facebook but it is casting a darkening shadow over everything being developed in Silicon Valley and beyond.  Hence the widespread coverage of the story of an Uber self-driving car killing a pedestrian in Arizona.  The Chinese authorities, however, have no such angst and are rushing forward in what appears to be an effort to realise a form of total surveillance of the population through the use of facial recognition.  A digital totalitarianism of the masses beyond anything the Silicon Valley firms are doing with their staff.  Orwell’s Big Brother is likely to be born in China not Oceania first:

China is rife with face-scanning technology worthy of Black Mirror. Don’t even think about jaywalking in Jinan, the capital of Shandong province. Last year, traffic-management authorities there started using facial recognition to crack down. When a camera mounted above one of 50 of the city’s busiest intersections detects a jaywalker, it snaps several photos and records a video of the violation. The photos appear on an overhead screen so the offender can see that he or she has been busted, then are cross-checked with the images in a regional police database. Within 20 minutes, snippets of the perp’s ID number and home address are displayed on the crosswalk screen.

The Information profile Amazon’s Jeff Blackburn, the other Jeff who’s been at the company 20 years in a variety of roles and is currently SVP Business Development with Prime Video as part of his brief:

“In corporate development, Jeff [Bezos] does not want pragmatists. He really wants someone who thinks big and does not think anything is crazy or impossible,” the former employee said. “The better the company does, the more [Bezos] gets concerns that people are getting fat, dumb and lazy.”

NYT profile some recent patent applications that suggest that consumer caution on the longer-term direction on digital voice assistant privacy, where Amazon is a tech and product leader, is warranted.  The install base in the US is now substantial enough to represent a serious target:

A recent Gallup poll found that 22 percent of Americans used devices like Google Home or Amazon Echo. The growing adoption of smart speakers means that gadgets, some of which contain up to eight microphones and a camera, are being placed in kitchens and bedrooms and used to answer questions, control appliances and make phone calls. 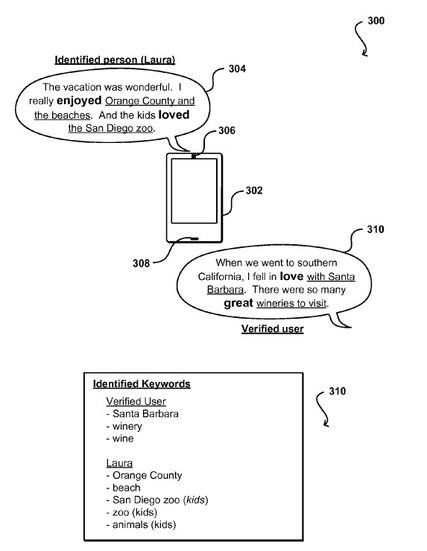 There have undoubtedly been spectacular advances over the last 2-3 years in applied deep learning and reinforcement learning based approaches:

Deep learning has brought us terrific capabilities in processing speech, text, image, and video.  Add reinforcement learning and we get big advances in game play, autonomous vehicles, robotics and the like.

However, we remain stuck with fundamental problems including the large quantity of training data required to build models and the relative opacity of hyperparameter fiddling.  It behoves the question what comes next?  This helpful blog post surveys contenders including Geoff Hinton’s capsule nets.

The Verge profiled the colorful Cedric Villani, French mathematician, Fields medal winner, National Assembly member who is currently compiling a much anticipated report into AI for the French government.  He delivered his new year greetings to his constituents thus:

He was dressed as always — winter or summer — in a black three-piece suit, a shirt with cufflinks, a spider brooch on his lapel, and a large, floppy tie called a lavallière (today’s version in purple). He cut an unmistakable figure, sporting a three-day beard, his dark hair styled in a pageboy.

Bland posts like this one outlining in the most generic terms how to develop a blockchain roadmap for your business are indicative of the hype around blockchain and how it is entering the mainstream corporate world.  According to data from CBInsights, it’s a strategy worth adopting based on what happened to a number of otherwise bland companies at the turn of the year when they independently announced blockchain related products:

when it comes to blockchain technology, investors are not so discerning about how the technology is being applied. They are more interested in jumping quickly on the trend … all [the initiatives] attracted an initial flurry of investor interest that drove stock prices up, even briefly … many are still trading above their pre-announcement price.  For now, riding the blockchain hype still seems to be paying off.

Going agile changes the role of engineering manager and should allow for an altogether better way of working:

agile teams may have the truest form of managers, because in agile organizations managers actually have the time to spend with the people themselves.

Do astronauts believe in aliens?  Broadly yes, but they agree there is no evidence yet.

Remarkable research suggests that “watching a live theatre performance can synchronize your heartbeat with other people in audience, regardless of if you know them or not.”

The extraordinary replica winged god of Ninevah or lamassu now in place in the fourth plinth of Trafalgar Square is a must-see public art installation.  Celebrating and mourning the original destroyed by ISIS in 2015, The Invisible Enemy Should Not Exist shimmers and forces contemplation:

Riveted together from 10,500 empty Iraqi date-syrup cans, the relief sculpture has a disconcerting exactitude, with its polychrome wing on one side, the sheer gold wall and cuneiform inscription on the other, the god’s implacable face, its ruinous majesty.

Visiting this tour de force this week, I took some pictures to try and capture the profound defiance, majesty and sadness the sculpture conveys:

Fragility, sorrow and resistance, absence and presence come together in this project. The lamassu refuses to disappear. It persists. This is one of the very best fourth plinth projects. Thinking about it now, my heart is in my mouth. 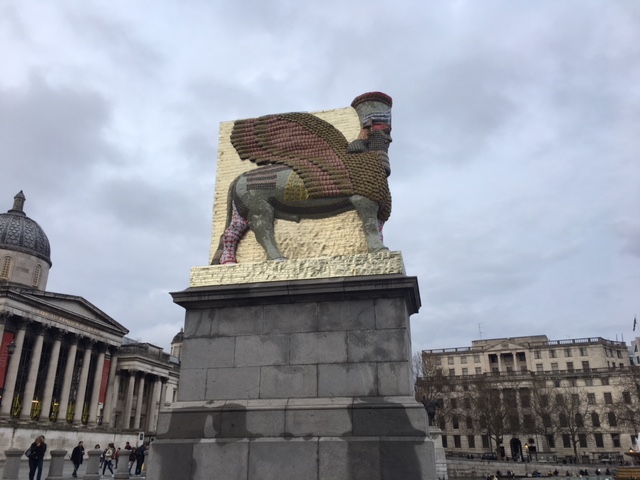 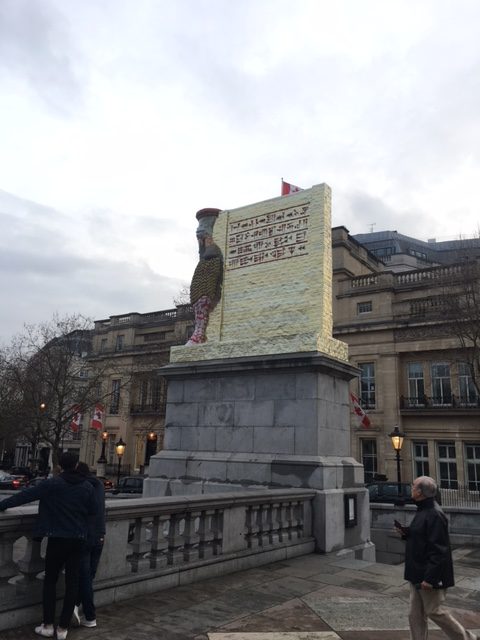 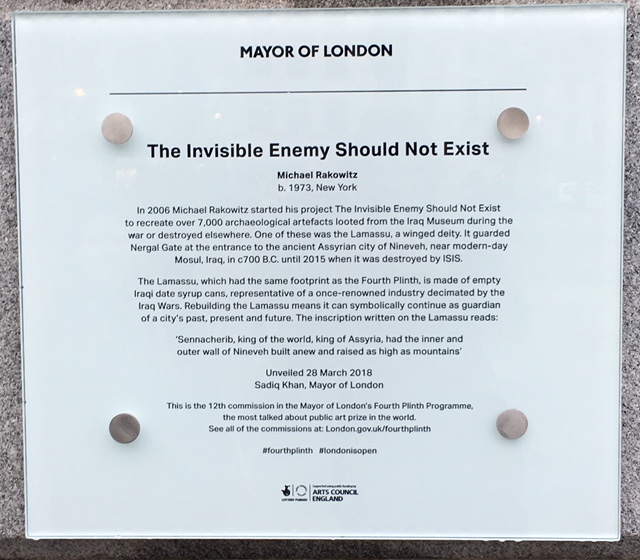 John Vidal in the Guardian on why the plastics crisis is way more serious than you think and even has the potential to reverse gains in human life expectancy.  Recycling a few plastic bottles isn’t going to address this horrific mess:

The more researchers look, the more they find in the human body. The same scientists who raised the alarm on air pollution from the deadly particles emitted by diesel vehicles are now finding plastic microparticles raining down on cities, and blown into the air from cars and construction sites, washing lines and food packaging. Indoor plastic pollution may be even worse than outdoors, with a single wash of sports kit or manmade textiles found to release thousands of microfibres into the air. 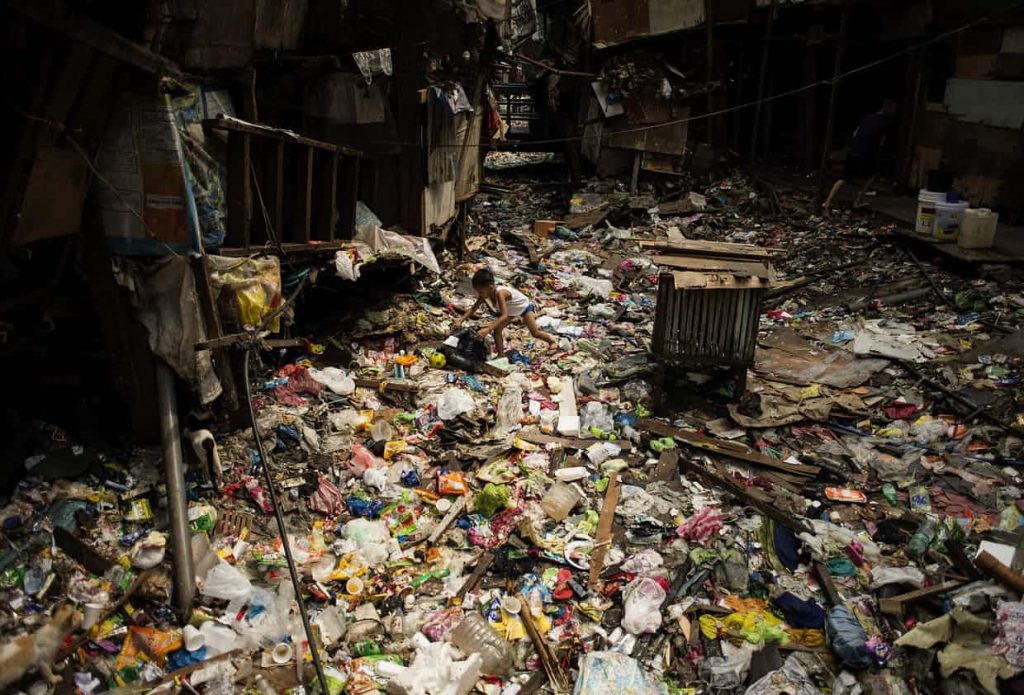 Unpaid internships used to be seen as a way to get into your dream job and career.  This long read from a disillusioned intern at Monocle suggests it is a path that is increasingly exploitative and only open to the children of better off parents:

failure to tackle unpaid internships prevents young people from low- and moderate-income backgrounds from accessing jobs in some of the most desirable sectors.

The state of US politics is officially a low:

NEW POLL: Most Americans say this is lowest point in US history https://t.co/IlfeQuwBxS pic.twitter.com/W053Z1H0w7

Trump’s policy on China has one major flaw.  It makes China the winner:

Mr. Trump’s hard-line approach to China seems destined to fail. Taking a stand against China’s abusive behaviors is not necessarily wrong. The problem with the president’s game plan is that it is inconsistent with all the other diplomatic initiatives he has taken so far. The tangle of stabs and swipes at allies and rivals alike, in the service of ill-conceived goals like closing a trade deficit, serves China more than it does the United States.

Sky news correspondent Adam Boulton toured the UK outside London and asked people for their thoughts on Brexit.  Here’s what he’s learned: