Jamie Bartlett in the Guardian predicts that “2018 will be the year of the neo-luddite” sensing with uncomfortable forboding a treacherous turn beyond even the darkness of 2016 and 2017:

Poll after poll in the past few years has found that people are worried about online privacy and do not trust big tech firms with their data. But they carry on clicking and sharing and posting, preferring speed and convenience above all else. Last year was Silicon Valley’s annus horribilis: a year of bots, Russian meddling, sexism, monopolistic practice and tax-minimising. But I think 2018 might be worse still: the year of the neo-luddite, when anti-tech words turn into deeds.

Bartlett’s post references Theodore Kaczynski the notorious Unabomber who was also motivated by a sustained neo-luddism strong enough to murder.  Kaczynski operated over a 17-year period from 1978 to 1995 and many of his preoccupations seem more relevant today:

Kaczynski, a Harvard maths prodigy who began to live off-grid in his 20s, was motivated by a belief that technological change was destroying human civilisation, ushering in a period of dehumanised tyranny and control. Once you get past Kaczynski’s casual racism and calls for violent revolution, his writings on digital technology now seem uncomfortably prescient. He predicted super-intelligent machines dictating society, the psychological ill-effects of tech-reliance and the prospect of obscene inequality as an elite of techno-savvies run the world.

The Unabomber Manifesto published in full in the NYT and WashPo in 1995 makes for disconcerting reading.  No-one can condone his appalling actions during his long bombing campaign.  It’s also a little unclear on the mechanics of rejecting all technology to go back to the neolithic.  Kaczynski did, however make some arresting observations in his overlong and at times repetitive tome which reads at times like an early 20th century political tract of the communist or socialist ilk he seems to particularly dislike:

While technological progress AS A WHOLE continually narrows our sphere of freedom, each new technical advance CONSIDERED BY ITSELF appears to be desirable … all these technical advances taken together have created a world in which the average man’s fate is no longer in his own hands or in the hands of his neighbors and friends, but in those of politicians, corporation executives and remote, anonymous technicians and bureaucrats whom he as an individual has no power to influence.

A tenuous connection perhaps but that less is more when it comes to running software.  It all makes perfect economic sense from a Division of Labour perspective to choose standard technology and avoid all undifferentiated heavy lifting.  Following this route however leads to the very devaluation of effort neo-luddites fear:

as technology advances and provides us with more advanced software components it devalues and commoditizes what we’re working on and at worst makes us redundant.

The prospects for doing anything about this seem remote given the modern map of the territory has the GAFA quartet (the Four Horsemen) ranged against innovative startups, talented individuals and copycats. The neo-luddites have an almost impossible job influencing enough people across all these domains to make a difference.  It seems more likely that external events will need to intercede to force change: 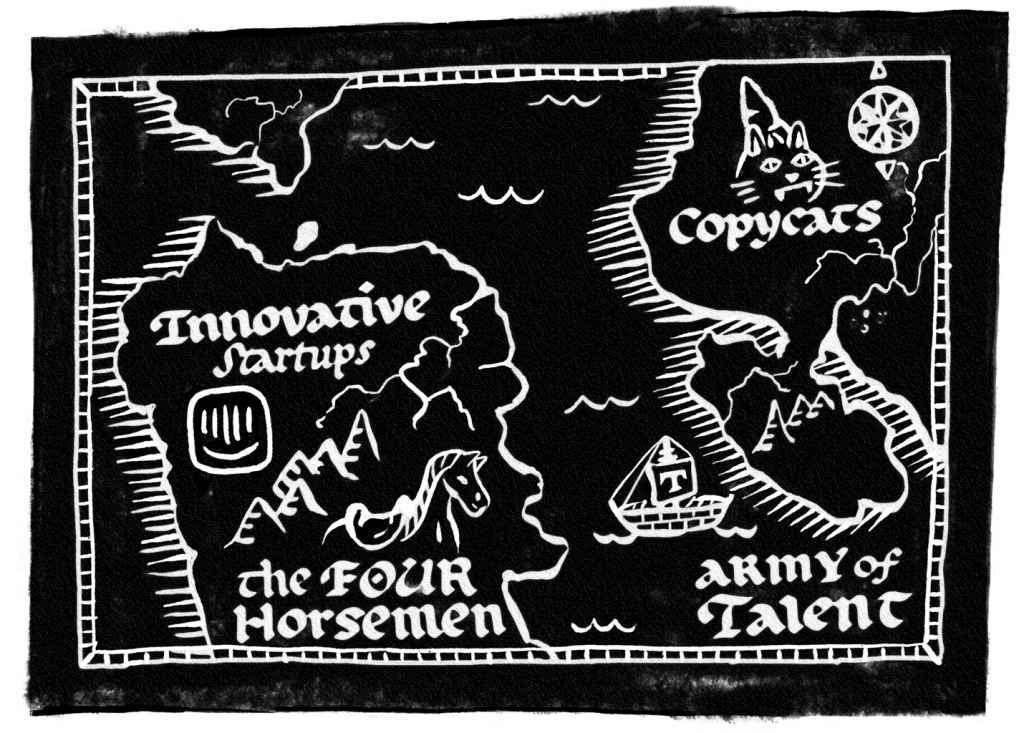 Instacart blog article on how to create a deep learning model in 15 minutes using an open source framework they’ve developed called lore that conveniently wraps a bunch of Python machine learning utilities including Keras plus Heroku for serving the resulting model output via a web app.  It’s all made available via a handy command line tool:

Lore is a python framework to make machine learning approachable for Engineers and maintainable for Data Scientists. 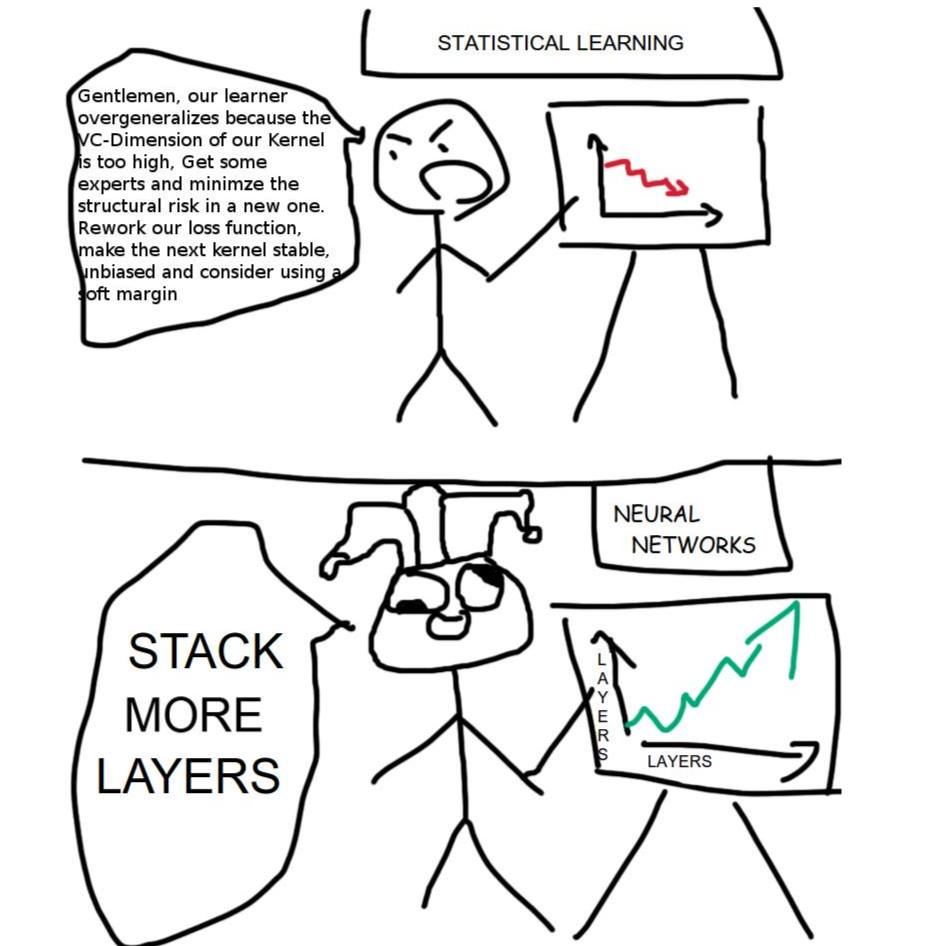 Excellent post on the blueprint for developers wanting to get started with machine learning. This diagram captures the new stack: 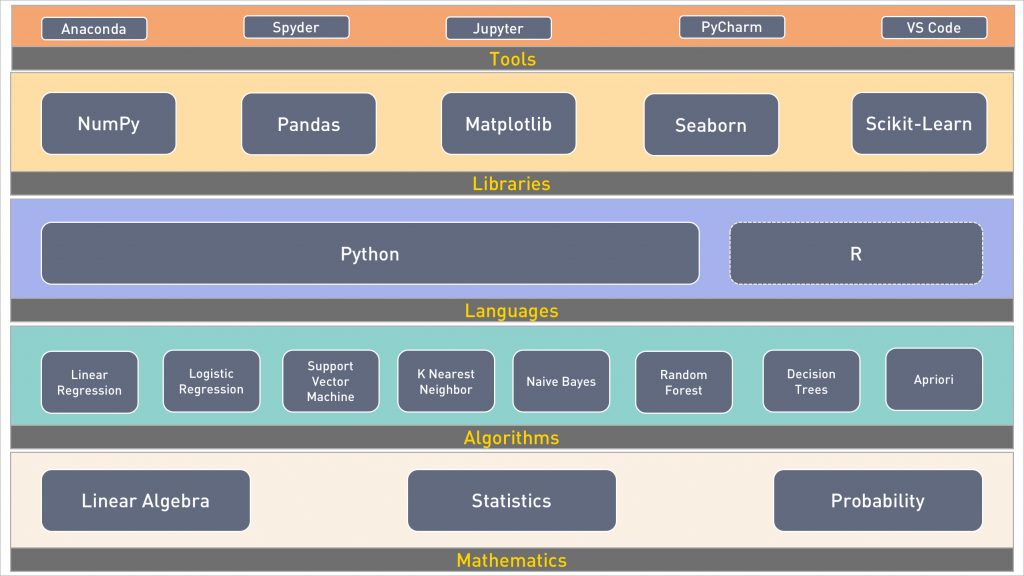 Staying on a learning-oriented theme, a recently released crash introduction to ML course from Google based on TensorFlow and Python is very good:

Google is offering a machine learning course. from learnprogramming

AI “will be the art movement of the 21st century“.  Here’s an example of augmented art as it is referred to:

At a time when many US cities are vying to be HQ2, The Atlantic publish an article on the downside of having Amazon open warehouses in your area for those who find either perm or temp jobs working in what insiders refer to as “the Hunger Games”:

Amazon are also getting some social media stick for including NRA TV in their video service:

WILL: Stop selling a competitors product.

WILL NOT: Stop advertising on the bigoted content of Breitbart; stop streaming race-baiting propagandistic NRA TV on their platform. https://t.co/O3S6pTYY3K

Front-door tech is hot and it’s not just Amazon who want in with their $1 billion acquisition of Ring.  Others like Yale, AirBnB and Uber are likely to be interested in acquisitions in this space over the coming year.  Amazon could potentially integrate Ring with the delivery robots described in this patent: 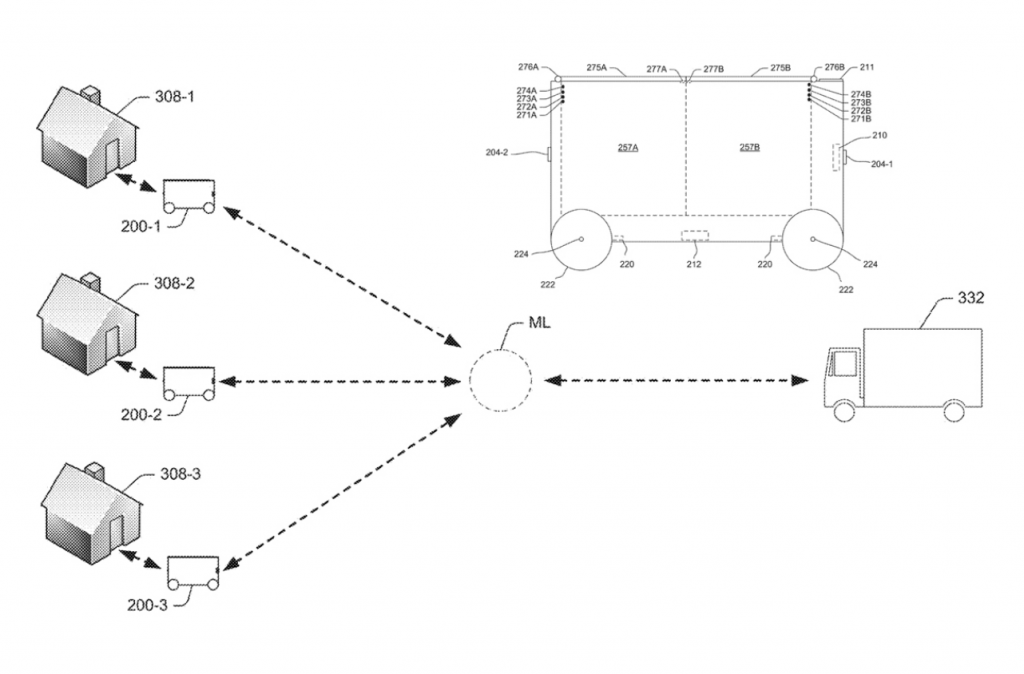 The Information on who is most and least likely to buy a media company this year:

Despite cultural differences, there is a decent chance a big tech company buys a media company in the next year or two. The most likely buyer is Alphabet, while both Apple and Amazon are possible acquirers as well.

Why the world is finally ready for a revival of the Nokia Communicator 20 years on: 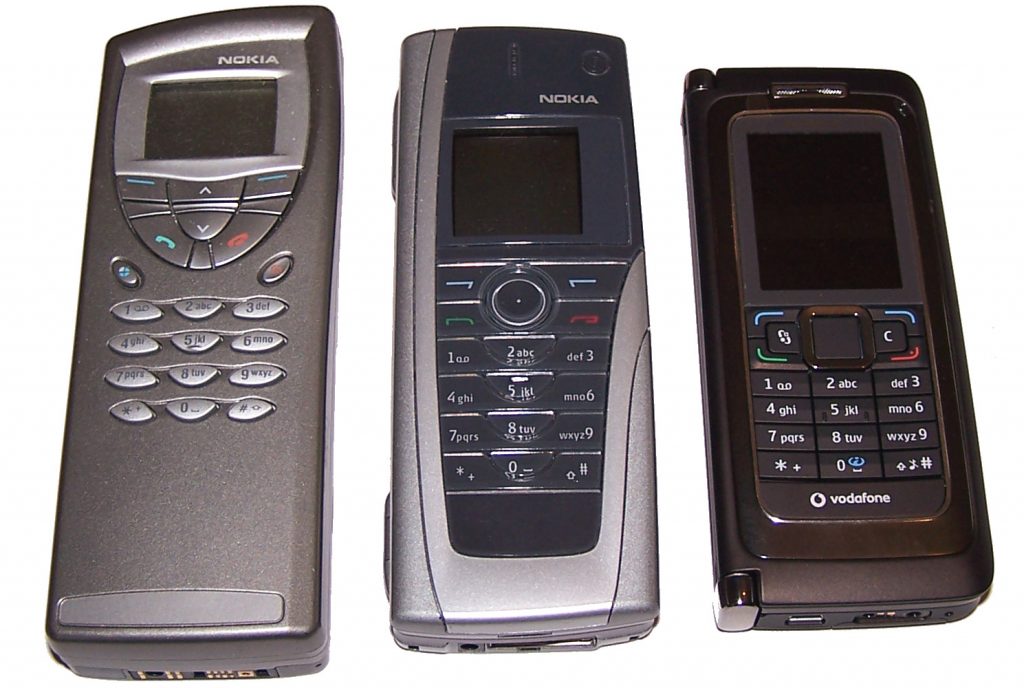 Why is Elasticsearch so successful?  It’s not rocket science but customer focus:

Elasticsearch stepped in … leveraged all the Lucene and Solr work done to that date (e.g. Analyzer filters contributed by Solr back to Lucene) and built the minimum required to address the gap Solr did not. That included documentation, examples, optional components, administration UI, etc.

This tremendous must-read article from MT Lynch on why he left Google offers a lot of awesome, revealing insights into what it’s really like to work in a big Silicon Valley company and why it is so very difficult to get the environmental conditions right for promotion:

Google kept telling me that it couldn’t judge my work until it saw me complete a project. Meanwhile, I couldn’t complete any projects because Google kept interrupting them midway through and assigning me new ones.

Steven Sinofsky read MT Lynch’s post and followed up with an excellent post examining promotion and performance reviews from a management perspective explaining why it is necessary to have a system in place and why the existing “annual review” process used in companies like Microsoft and Amazon though unsatisfactory is arguably the least worst one.  Sinofsky’s key takeaways are well worth studying and reveal how often we think of ourselves as “above average” when in fact simple reflection would show that can’t possibly be true:

Coincidentally, Quartz published a special on the Peter Principle or the promotion of people above their competency level.  Turns out the name comes from a British sitcom:

FirstRound on eliminating bias from hiring and boosting retention.

An important post on why MBA programs end up killing your economy. They produce cohorts of bean-counters, of “takers not makers” with an ingrained dislike of risk-taking innovation in favour of focus on existing cash cows:

MBAs are everywhere, yet the industries where you find fewer of them tend to be the most successful. America’s shining technology and innovation hub—Silicon Valley—is relatively light on MBAs and heavy on engineers. MBAs had almost nothing to do with the two major developments in the American business landscape over the last forty years: the Japanese-style quality revolution in manufacturing and the digital revolution.

Area of the Circle pic.twitter.com/NTFPSuuSxH 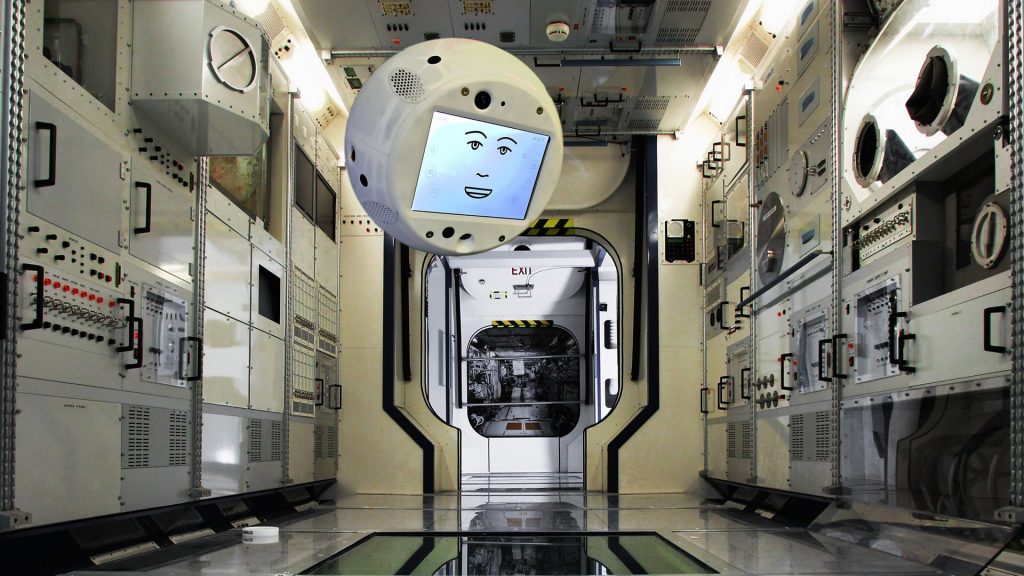 The refrain “if you’re so smart why aren’t you rich?” has haunted many.  Turns out that the answer lies in the certainty of chance.

Ionic Materials in Massachusetts is apparently close to realising the dream of a solid state battery.

Dogma in programming as in much else in life considered harmful.

Aeron Davis in The Guardian outlines why the British Establishment that underpinned class system dynamics for hundreds of years may be finally finished as an effective force because “they seem to be less able to exert control or predict what those consequences will be“.  The degradation and diminution of the role of the state has led to the ultimate reason for non-elites to eschew the regime:

the new regime – for all its individualist and anti-state rhetoric – still depends on the state. Elites require a rule of law, security, a transport infrastructure, an able workforce and social stability to function. But neoliberalism promotes an ever-smaller state and a poorer, less able employee pool, and nods through corporate and super-rich tax evasion on an industrial scale.

Brexit may hasten the process as the Establishment represented by Theresa May makes a total Suez-scale mess of proceedings.  What you want and what you get are two entirely different things:

We would put ourselves and the rest of Europe through a great ordeal, only to end up with an arrangement rather like the one we could have had anyway, all for the sake of feeling in control. Except that, in this case, the end result would be both inferior to, and much more costly than, the dish originally on offer.